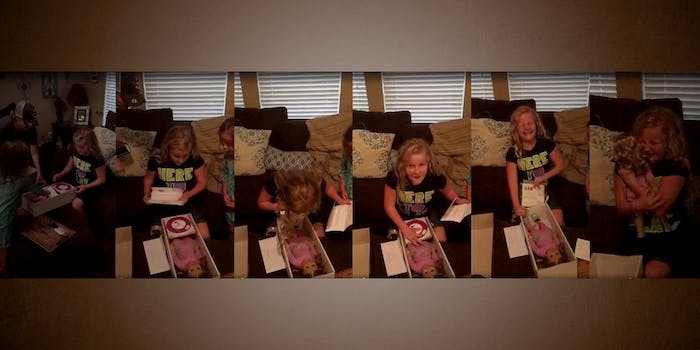 And now the company that made it wants her to visit.

Crying at viral videos has never exactly been my thing, so trust me when I say that this one may unexpectedly move you to tears.

Courtney Fletcher Bennett posted a video on Facebook of her daughter, Emma, unboxing a new doll. Emma has a prosthetic leg—something not many dolls come with at the toy store. So Emma’s parents called up A Step Ahead Prosthetics and had her doll outfitted with a prosthetic leg of her own.

Emma quickly moves from smiles to tears as she cries “It has a leg like me!” and your face should be sopping wet right about now. Her mother then reads her a letter from A Step Ahead, which told the doll’s story. “After she arrived, she was given a room to stay in while her new leg was made. She was fitted with the leg in her favorite color, pink, and started walking right away. After a few weeks of training to walk and run in her new prosthetic, she is ready to go home and live her life without limitation with you.” FULL ON UGLY CRY TIME.

The Daily Dot has reached out to the Bennett family about the video, which now has over 8 million views. Meanwhile, A Step Ahead wants to invite the Bennetts to their facility in Hicksville, New York, to have Emma go through the same training camp that her doll did.

“When you go to your prosthetic facility, you’re alone there, you’re not interacting with other amputees,” Jessica Terranova of A Step Ahead told the Daily Dot. Therefore, it’s important for amputees to feel like there’s a community, that they’re not different, that we’re all the same inside even if we have minor differences on the outside.”

This isn’t the first time A Step Ahead has made a prosthetic for a doll. A few years ago, the company made one for a patient’s doll, and since then they have been flooded with requests from all around the world. 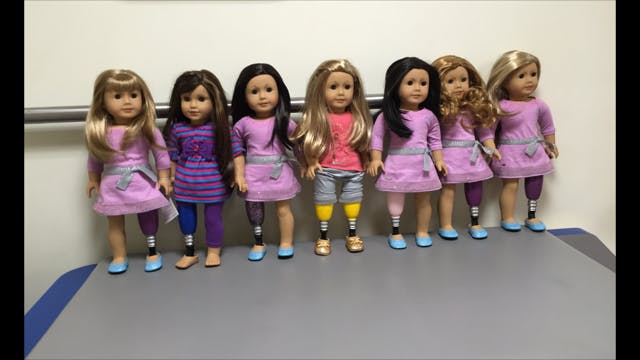 via A Step Ahead

Amy Palmiero-Winters, a runner who has a prosthetic from A Step Ahead, grew up with both her legs. “When I looked around, I never met anyone who was missing their leg,” she told the Daily Dot, so when she lost her leg, she felt alone. “Emma’s response, it opens your eyes to see that so many people feel alone with their differences. And being an adult now, we take those things for granted.”

Terranova and Palmiero-Winters, who now works with A Step Ahead, told the Daily Dot they’ll be contacting the Bennett family and inviting them to their facilities. But they also hope that a video like this shows everybody how important visibility is for people with disabilities. “For something like this to go viral, it’s such a good thing because it helps everybody out there see that we’re all different on the outside, but on the inside we’re the same,” said Palmiero-Winters.  “And maybe now if a little girl sees another kid with a missing leg, she’ll just smile and wave instead of thinking it’s a weird thing.”