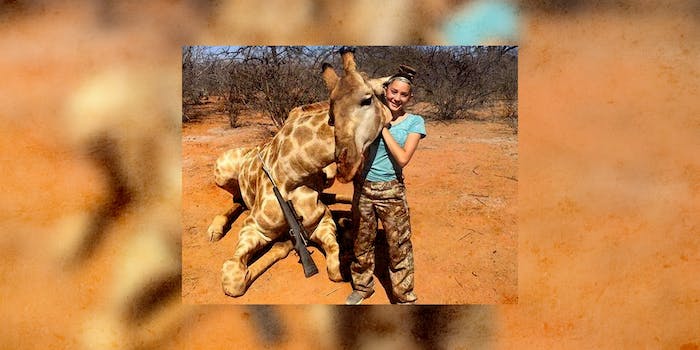 The tween hunter, who recently killed a giraffe in South Africa, had some strong words for her critics.

When does concern for animal rights cross the line?

It’s a question raised by a situation in which death threats and tens of thousands of angry comments were left on the Facebook page of a 12-year-old girl—all because she posted photos of the animals she killed while hunting in South Africa with her dad.

Aryanna Gourdin’s Facebook page is covered in hunting photos that the Utah middle-schooler takes pride in. And while the images are disturbing to many—showing a recently killed giraffe and zebra, among other animals—the comments directed at the child, like those calling for her to “hunt and shot,” are not always appropriate either.

Gourdin’s father, Eli, told Good Morning America, “We’re proud to be hunters.” He also told commenters to back off, saying, “I don’t tell anybody else how to raise their children.”

The viral outrage over the hunting photos was parallel to the protests sparked by dentist Walter Palmer’s photo of Cecil, a lion he hunted and killed in Zimbabwe. After Palmer’s photo with the dead lion went viral, the dentist’s business was besieged by active protest lines, and his home and family were threatened.

The details of Palmer’s lion hunt were different: The lion had been a protected subject in a local study, and Zimbabwe asked the U.S. to extradite the dentist so that he could face charges. The Gourdin family told Good Morning America that their own hunt had been sanctioned by a local organization that said the giraffe was a nuisance, and meat from the slain animal was given to local communities for food.

On her Facebook page, Gourdin offered her justifications for why hunting can be more nuanced than many people realize—pointing out that hunting licenses in Africa often cost hundreds of thousands of dollars, money that goes to fund animal conservation efforts.

“We ate some of the meat and donated the rest. We helped secure a healthier population for the future. The money spent will help conservation efforts and boost the local economy,” said the 12-year-old hunter in a post. “Hunting is hunting period. Just because someone chooses to display their ‘trophies’ doesn’t make them a bad person.”