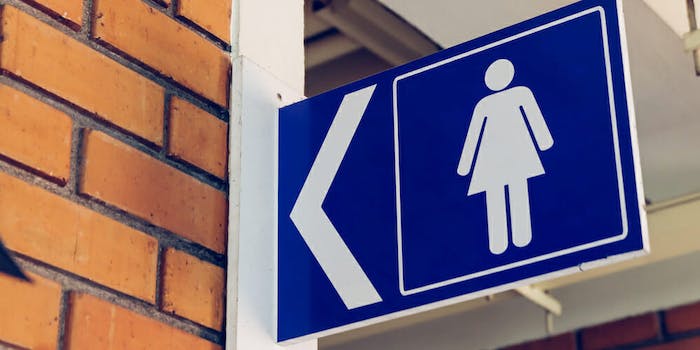 Student expelled for defending herself against boys ‘protesting’ in girls’ bathroom

Apparently, trans girls aren’t allowed in the girls' bathroom, but a group of self-identified boys are.

A girl has reportedly been expelled from school after a group of boys entered the girls’ bathroom in an anti-trans “protest” and she kneed one in the crotch for blocking her.

According to the Washington Post, a transgender boy had taken a selfie in the boys’ bathroom at North Pole High School in Alaska on April 4, and some of his male classmates were upset by the photo he posted to Snapchat. To demonstrate their anger, they decided to “protest” by going as a group into the girls’ bathroom to take photos. Obviously, there is a huge difference between a single trans student using the bathroom that matches their gender identity and taking a picture to celebrate that moment, and a group of boys going into the girls’ room together to take pictures

The anti-trans protest was met with unexpected resistance, however. There was a girl in the bathroom, and she was not having any of their nonsense. The group of boys allegedly blocked her from leaving, and she responded by kneeing one of them in the crotch, prompting a hasty retreat.

Now, the girl’s family says she has been expelled, following a Title IX investigation that, according to Superintendent Karen Gaborik, concluded there was “not evidence that the boys were threatening any student or using any type of force toward students.” Most people would consider a group of boys trapping a girl in a confined space threatening—and they’re speaking out against the school district’s decision.

State Rep. Tammie Wilson has been particularly outspoken on the punishment. “Was she supposed to not protect herself? She was where she belonged. They were not,” she said in an interview with the Daily News-Miner. “I would have taught my daughter to do the same.”