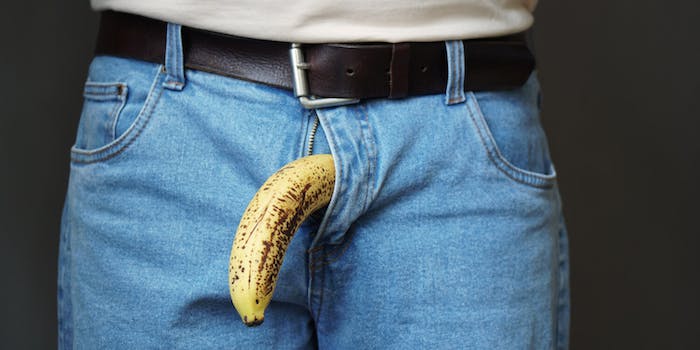 Giddy delivers on its promise to fix erectile dysfunction

This device attacks all sides of the problem.

Erectile dysfunction is like getting hit in the balls. Everyone with a penis will experience it at some point, and, while it sucks, the embarrassment is really the worst part. Medications can work, but they’re a chemical solution to a problem that may have deeper roots. That’s why Giddy got our attention. It’s a non-chemical way to address the immediate issues of erectile dysfunction—and acknowledges that sometimes your emotions are why your dick stays soft.

Giddy calls itself a treatment for erectile dysfunction (ED), but it’s essentially a medically approved cock ring. Where it sets itself apart from stretchy, “one size fits all” cock rings is its rib-shaped design and use of tension bands. Users place the device over the shaft of their penis and then tighten by connecting a tension band to the bottom prongs.

Giddy is an FDA-Registered Class II Medical Device that was developed by urologists to help you keep an erection. It’s made of medical-grade polycarbonate/ABS alloy and covered in a proprietary thermoplastic elastomer. In non-scientific terms, Giddy is easier to clean than any cock ring I’ve ever used. It feels sturdy but soft to the touch. And thanks to its variable sizing, it can be a useful aid no matter what’s in your tackle box.

Most importantly, buying Giddy doesn’t just give you the device. Giddy also includes educational videos to help you and your partner explore the causes of erectile dysfunction. ED can be caused by a host of problems like hormone imbalances, prostate cancer, medication, stress at work, depression, decreased intimacy in your relationship, or the dog jumping on the bed at the wrong moment. Depending on when it manifests itself, it can be hard to figure out the cause.

Giddy’s videos help humanize the issue of erectile dysfunction, removing the toxic cultural stigmas and providing useful information. An instant boner pill can give you five hard-ons per month for $40, but Giddy’s educational materials give you answers that can help you even when your device isn’t handy. It’s refreshing to see a company acknowledge ED isn’t a solo battle. It impacts everyone in your relationship, and you shouldn’t fight it alone.

All that educational information is great, but the real question is, “does Giddy work?” The answer is yes. Of course, a positive review is meaningless if you don’t know some frustratingly personal information about the author.

I’m a 35-year-old white male with a pretty sedentary lifestyle aside from a daily walk. After a great deal of effort, I’ve cut fast food down to about once a week, but I still drink too much. Most nights, I’ll have at least a beer, but two drinks a day isn’t uncommon. I’m broad-shouldered, 5 feet, 11 inches. According to the doctor, for my body type, I’m about 15 pounds overweight.

In terms of ED, I’d like to believe I’ve had a standard amount of misfires, particularly given my health history. Sometimes it won’t happen for months, sometimes it’s once or twice a month. While not a reoccurring problem, it’s embarrassing when it happens.

In my personal life, there are a few triggers: A depressive episode, being stressed about money, trying when it’s really late at night. Or, when I’ve had to much to drink. Thanks to a series of lifestyle changes in the last year, largely in diet, it’s not a problem. However, like the devil, it still pops up from time to time. Or fails to pop up, I guess.

During the month I tested Giddy, I kept track of my mental health, diet, sleep, level of frustration, and substance intake to get an honest reaction. Normally it would be impossible to trigger all my symptoms at once, but COVID-19 made sure this review didn’t happen during normal times. The last month has been an isolated hell for most Americans. But it offered me a set of controls for erectile dysfunction and the opportunity to test the device.

During testing phase, I had sex during each of my standard “problem situations.” The greatest hits were there: a depressive episode, a petty fight about something else, a looming deadline, 2am horniness, and—everyone’s worst enemy—too much whiskey after dinner. A real rogues’ gallery of limp noodles, ready and waiting to just kind of hang there.

After a month of use, I can say that Giddy is perhaps the best sexual aid I’ve ever used. Pills and instant chewables are great but inconsistent, and often the stress of waiting for them to kick in takes you out of the moment. But Giddy never made me worry. Instead, its design helped me stay erect no matter the situation, while its educational materials helped me stay in a healthy mindset in between sessions.

Giddy’s biggest strength is its comfortable design. Unlike traditional cock rings, Giddy’s oval design allows for a more comfortable fit instead of simply holding your penis in a death grip. It helps keep you hard without feeling like it’s cutting off your circulation. While a little trim of your pubes helps to get it on easily, Giddy also doesn’t snag your hair the way stretchy cock rings do.

That means Giddy is easy to put on at the beginning of foreplay while you’re getting fully hard, instead of being something you’ve got to stop making out to put on when you’re properly rigid. For the ED struggles I’ve faced that involved emotions, mental health, or ADD, this has been a godsend. I’m not waiting for the moment to put it on; instead, I found myself fully engaged and often forgot I was wearing it at all.

Introducing sexual aids into your relationship can be terrifying, but it shouldn’t be. A sex aid is you saying, “Hey, let me do you better.” In some ways, the very idea of offering to use one is sexy, because you’re putting your pride aside to benefit your mutual pleasure.

Meanwhile, Giddy’s included educational videos walk you through difficult conversations. Culturally, we treat sex as something you’re either good at or not. But that ignores all the intimate details of life that get in the way. By combining a medically sound cock ring with smart and empathetic advice on sexual honesty, Giddy helps remove the shame of ED—and makes every day a little more fun.

I had the most difficulty getting Giddy to work due during a depressive episode. I tried to take Giddy’s educational materials to heart and admitted that the pandemic was getting me down. But the educational materials got me through the moment. Healthy communication isn’t the sexual fantasy I was dreaming of, but Giddy was right: It works wonders.

Of course, Giddy doesn’t work miracles. At 35, too much whiskey is too much whiskey. During my tests, I was able to have normal sex using Giddy after having a few drinks with dinner. But on the night we had three beers and three shots each, even the Giddy was saying, “Maybe just focus on her tonight.” That’s fine.

The device’s simple design makes it easy to clean with antibacterial soap and hot water, while the carrying case helps keep it safe when not in use. Plus, the interchangeable tension bands allow you to customize it to your exact level of snugness. If you’re struggling, you can get a little extra grip.

That said, size matters when ordering. Giddy sent the Daily Dot a sample of each size for this review, but speaking from personal experience, you don’t want to use the wrong size. Swallow your pride and use a tape measure around the base of your penis to make sure you get the size you need.

Is Giddy worth it?

Giddy is such an effective product that I’ll put my name on an article admitting I sometimes have ED. But statistically, most folks with a penis my age have had similar experiences—even if they aren’t willing to talk about it in public. It’s nothing to be ashamed about unless you allow your feelings to make you shameful. Anger toward a partner, anger or depression towards yourself, and even feelings of inadequacy are common side effects of ED. Those are natural feelings, but they’re toxic ones that only make the problem worse.

By offering a mix of medical help and mental health, Giddy attacks all sides of the erectile dysfunction problem. It offers an effective, longterm solution and helps you find connections between your everyday realities and your sexual health.

In many ways, Giddy’s system reflects a healthy sexual relationship. It isn’t enough to just be hard; you have to work on who you are as a person to truly know sexual satisfaction. Communication, sleep, a decent diet, mental health, and genuine intimacy are just as important as blood flow when maintaining an erection.

In an era of great uncertainty, it’s cool to see an erectile dysfunction product that doesn’t pretend a hard dick will fix all your problems. But if you want one of those, Giddy has you covered.

Correction: Giddy is not FDA-approved.