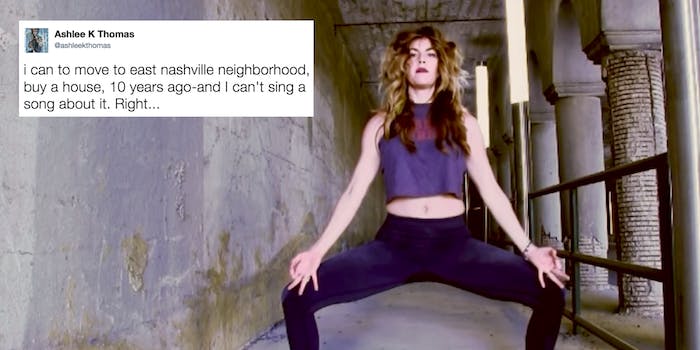 Residents are not happy about this.

Just when you think the internet has finally shut the door on white women objectifying black culture and misrepresenting a group of people, a door to critique yet another “well-intentioned” white woman opens.

This week that white woman is Ashlee K. Thomas, a singer-songwriter who moved to East Nashville some 10 years ago. On April 30 Thomas released the music video for a song that might be the greatest affront to East Nashville natives, titled “Ghetto.”

In the four-and-a-half-minute video, she sings a Lana Del Rey-esque melody over hallow guitar chords and picks, backed by a hip-hop beat. Between scenes of Thomas lip-syncing in a car and playing guitar against a brick wall, she casually practices her yoga moves in a back alley—because nothing screams, “I’m here to gentrify your neighborhood,” like Lululemon leggings.

“Gunshots and sirens are the music of the ‘hood,'” Thomas opens in the first line. Then comes the grimace-inducing nitty gritty.

People with “flashy rims, low riders,” are “up to no good,” while transplant Thomas “doesn’t fit in.” But don’t worry, dear listener—”she’s good living in the ghetto.” She gets by with a flashed smile and a peace sign.

The song’s imagery doesn’t get much better. While one person pushes all their possessions down the sidewalk in a grocery cart, Thomas muses, another prays to God while standing in line at the welfare office. Thomas sometimes gets hollered at for some cash, but otherwise she manages to fit in among the milieu of smoke, discarded bottles, and random street fights.

The politics of the song and accompanying video are pretty horrendous—Thomas is a white woman who has written an extremely stereotyped account of East Nashville and its predominantly black community, equating her experience to black culture by titling the song “ghetto,” a term which has long been written off as a euphemism for being black. And then there’s the yoga, where Thomas continues to flex her controversial presence with appropriation.

Naturally Thomas’s ode to “ghetto” survival has gone over just about as well as you’d think. From online commentators to commentators at East Nashville’s local publication, folks continue to take issue with Thomas and “Ghetto.” People who lived in East Nashville decades before Thomas’s move 10 years ago expressed that the community was heavily gentrified long before her arrival.

“Damn y’all, is that what happens when an eighty dollar Lululemon yoga mat becomes sentient?” one commenter asks sarcastically.

Michael Harriot scathed Thomas’s video over at the Root, writing, “We should really applaud her yoga instructor because the average white savior would’ve pulled a muscle Beckying [or using her white privilege for self-gain] this hard, but not Ashlee K. Thomas.”

i can to move to east nashville neighborhood, buy a house, 10 years ago-and I can't sing a song about it. Right…

That's not the problem. It's the fact that yor song is ridiculously offensive and proof of how privileged/unaware you really are.

Using "ghetto" to describe a community is in itself problematic. Would a love song to a person include a derogatory term to describe them?

Nothing really drives home the idea of a white person singing about the ghetto like some yoga.

Thomas, who didn’t immediately respond to the Daily Dot’s request for comment, appears to be aware of the backlash to her art, as evidenced by her Twitter comments, her unapologetic apology to Lomax and his sister via email, and her YouTube video description:

I have love in my heart, body and energy for the people deeply affected by this song & video. I am understanding and compassionate towards the chord this strikes and how difficult my bringing light to a very real truth and shrouding it in love and yoga, is.

It seems like she gets the general gist of why her work is certifiably bad. But she still doesn’t seem to get it. To her, it’s not stereotyping a community that she had no part in maintaining—it’s “shrouding” a “truth” with “love and yoga.” And despite the criticism, Thomas still thinks her video is valid. She won’t apologize for the content itself.

“I stand by this song and video,” she wrote in a YouTube comment on Friday, according to the Tennessean. “Aside from moving from the suburbs, this song is not about me. This song is an observation of what I’ve seen in Nashville, Memphis, India, South America and other places I’ve traveled. I do yoga in the video, because yoga helps me do better at living wherever I am.”