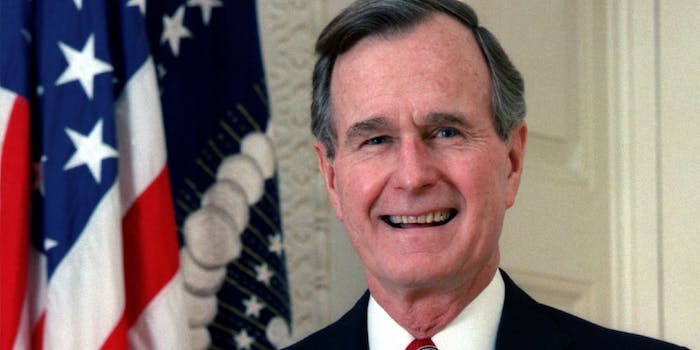 Photo via US Govt/Wikipedia (Public Domain)

Woman says George H.W. Bush groped her when she was 16

In the past three weeks, five women have said President George H.W. Bush groped them. Now, another has come forward to say Bush grabbed her buttocks when she was just 16 years old.

Roslyn Corrigan told Time that Bush groped her in 2003 when her father and other Central Intelligence Agency officers met Bush, then 79 years old, at an event in the Houston suburbs.

“My initial action was absolute horror. I was really, really confused,” Corrigan told Time. “The first thing I did was look at my mom and, while he was still standing there, I didn’t say anything. What does a teenager say to the ex-president of the United States? Like, ‘Hey dude, you shouldn’t have touched me like that?’”

Actress Heather Lind first accused Bush last month of touching her from behind during a photo op and telling her a dirty joke. Bush apologized and a spokesman called the incident an “attempt at humor.” Less than a day later, actress Jordana Grolnick said she had heard Bush had a reputation for fondling during photo ops, but she was skeptical about it until she said he groped her from behind.

Though Bush’s spokesperson has said Bush had “patted women’s rears” in recent years because he was in a wheelchair and “his arm falls on the lower waist of people with whom he takes pictures,” Bush was standing upright when taking the photo with Corrigan, who was a minor at the time.

“As soon as the picture was being snapped on the one-two-three he dropped his hands from my waist down to my buttocks and gave it a nice, ripe squeeze, which would account for the fact that in the photograph my mouth is hanging wide open,” Corrigan, now 30, said. “I was like, ‘Oh my goodness, what just happened?’”

After Bush walked away, Corrigan told her mother that “he grabbed me on the rear end.”

Her mother, Sari Young, said she was “very upset” and “really, really mad,” and it had been “just some Joe Blow or something,” she probably would have confronted him right away.

“But, you know, it’s the president. What are you supposed to do?” Young said. “And you’ve got your husband’s job that could be in jeopardy. I mean, you just didn’t then. You should—you should have always spoken up, always—but we didn’t.”

In a statement to Time, Bush spokesperson Jim McGrath said, “George Bush simply does not have it in his heart to knowingly cause anyone harm or distress, and he again apologizes to anyone he may have offended during a photo op.”