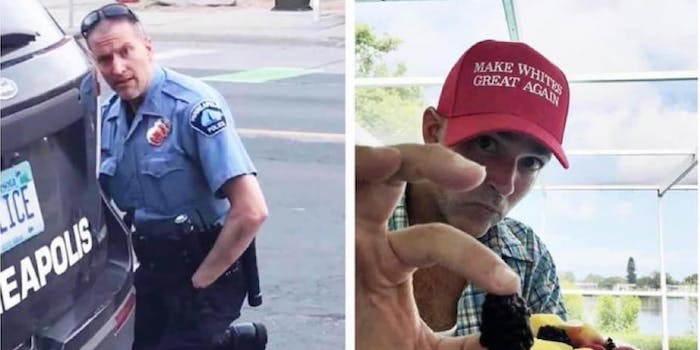 No, the officer who knelt on George Floyd didn’t wear a ‘Make Whites Great Again’ hat

A photo of a man in a ‘Make Whites Great Again’ hat is going viral. People are claiming that man is Derek Chauvin.

A photo of a man in a MAGA-esque “Make Whites Great Again” hat is going viral. People are claiming that man is Derek Chauvin, the former officer who knelt on George Floyd’s neck, suffocating him.

On Monday, a video went viral of the then Minneapolis police officer, pinning Floyd, a Black man, down for nine minutes as Floyd repeatedly said he couldn’t breathe. Floyd later died.

On Wednesday morning, a photo went viral on Twitter of what appears to be Chauvin wearing a “Make Whites Great Again” red cap.

One of the first and most prominent voices to share the misinformation is activist and Bishop Talbert Swan. Swan shared two photos early Wednesday morning. One is a still of Chauvin from the video, kneeling on Floyd’s neck. The other is what appears to be a selfie of a white man holding fruit and wearing the “Make Whites Great Again” cap.

Eventually, “Make Whites Great Again” began trending on Twitter, with others similarly touting the misinformation. However, some pointed out the man in the photo is not Chauvin, but Jonathan Lee Riches, a Trump-supporting internet troll known for filing lawsuits.

Riches told Snopes that while he is the person in this photograph, his hat was Photoshopped to say, “Make Whites Great Again.”