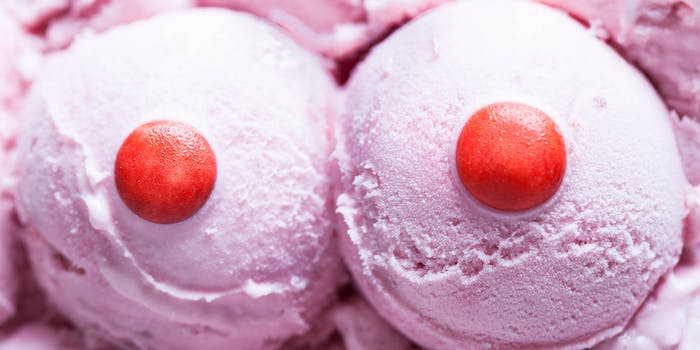 Whose nipples are these? Who cares!

Instagram’s nipple policy has been the source of much debate, outrage, and parody, highlighting the double standard of censoring nipples attached to female breasts and letting those that are not, stand free. However, one Instagram account is now proving that, up close, all nipples are equal.

Genderless Nipples was created to protest Instagram’s policy—”Men are allowed to show their nipples, women’s get banned. Support ALL genders! Let’s change this policy!” its bio reads. And the account is as advertised, just photos of nipples with no word as to who they are coming from.

Why would anyone be offended by their own anatomy? ⭐️

My nipple isn’t sexual, your thoughts are.

The account was briefly taken down, though creator Evelyne Wyss told the Daily Dot it was because of a hacker, not because of Instagram.

Instagram has previously banned photos of a cake after thinking it was a woman’s nipple, which shows you how serious it is about its policy. Last year, Instagram updated its policy to allow photos of breastfeeding and post-mastectomy scarring but said that it bans women’s nipples to keep its 12+ rating in Apple’s App store. But as this account proves, nipples know no gender.

Update, 7:52am CT, Dec. 6: Wyss tells the Daily Dot that one of the account’s male nipple photos was removed by Instagram. “They can’t even tell the difference between male and female nipples. So why even bother banning female nipples if they can be so similar?” Wyss said in an email.

Wyss said she and partners Marco Russo and Morgan-Lee Wagner were inspired to start the account because of the election. “During that period, so many horrible things were said by candidates and their supporters about women’s rights and gender equality that we decided even though we’re not from the U.S., we feel responsible to do something about it. And what better way to start spreading a message of gender equality than pointing out the rules of social networks?”

Wyss hopes that Instagram, whatever its rules are, enforces them equally.