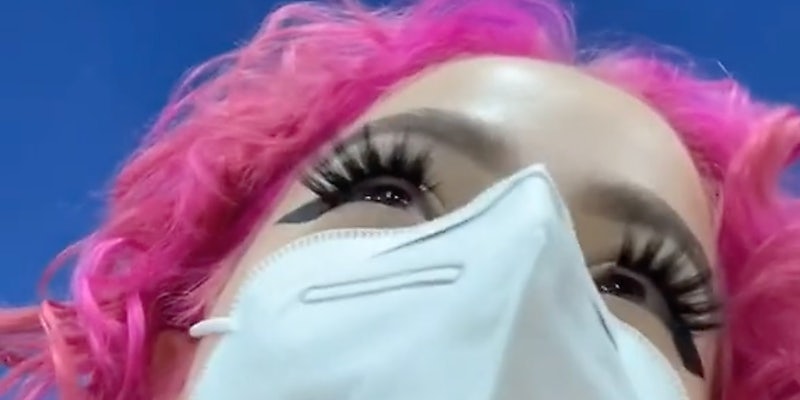 ‘Maybe we could rendezvous one day’: Man continues to harass TikToker after she tells him she’s gay

He wouldn't let up.

If a woman tells a man she isn’t interested in him, that should be the end of the conversation. But as most women know, far too often, that isn’t the case.

A TikToker named Jen (@lab1a.lover) shared a recent interaction she had with a guy who wouldn’t leave her alone when she told him she not only wasn’t interested in him in particular but that she’s gay.

The video itself starts mid-interaction. It’s clear Jen has already told dismissed his advanceds and explained her sexuality—but he continues to harass her.

“I’m still gonna be gay,” she says at the start, in response to something inaudible.

“OK, at the end of the day I understand that,” the man says off-camera. But he then suggests, “Maybe we could rendezvous one day.”

“I’m OK, but thank you,” Jen politely tells him.

The man escalates the conversation, inquiring whether she “like[s] dick at all” and if she’s ever “had any.”

Still far too polite compared to the man’s behavior, Jen brushes off his questions and tell him that she’s “good” and just wants to go home, at which point the man appears to finally let up.

This is the second video Jen has posted this month detailing uncomfortable interactions with men who just can’t seem to accept that she’s gay and not interested in their attention. The first video racked up over 1.4 million views, and both have prompted frustration from women who have found themselves in similar situations regardless of sexuality.

“Why can they never just stop at ‘you’re beautiful?’” one viewer asked.

Another asked if the man in the most recent video thinks “he has the almighty d to turn everyone straight.”

A number of viewers pointed out that Jen felt the need to be nice to a guy who was saying inappropriate things to minimize the potential risk.

“And that sums up how women coddle men emotionally so they don’t hurt us physically,” observed @olymckenze.

The Daily Dot reached out to Jen via TikTok comment but did not immediately hear back.