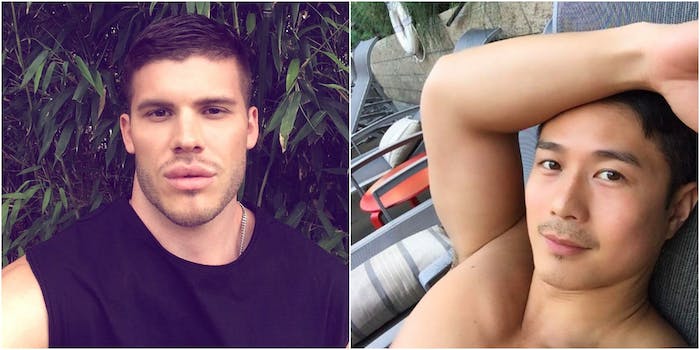 In his bio, Derek is a self-professed “dork,” playing video games and surfing Tumblr. That charm carries on through the ripped model’s plenty of pleasing gym selfies. After all, if you didn’t take a selfie at the gym, did it really happen?

Ken seems pretty at home letting someone else hold the camera while he does his thing. However, with his pouty lips, he does achieve some very sultry selfies that are worth dreaming about. His account is private, but if you give it a follow you just might be lucky enough to be granted access.

Golden boy Paul may not post too many self-portraits, but he does aggregate some great LGBTQ community content, from politics to pop star news, like the latest on Kesha. Oh, and he also has a great sense of humor when it comes to memes.

Joseph’s name really says it all—his profile pic is even topped off with a leather harness. Along with showing off his penchant for wolf speedos, he also shares drawings from classes where he’s modeled. And that art is way more detailed than simple stick figures.

Another gentleman residing in Spain, Abraham’s feed is all about the balance. In the streets, he’s a suave boyfriend to his adorable other half. In the sheets (and in his professional life) he’s pretty hardcore in the stills he shares. Live sex acts in a harness, anyone?

Even if you don’t have quite enough of a daddy complex for Bryce, you’ll still be in luck following him—and not just because of his sexy tattoos. Evans often reposts scenes from other guys like Scott DeMarco, and his costars usually end up being of the twink variety.

If you’re into tattoos, then Bruno has got you covered seeing as he is indeed covered in them. He’s also got you covered with Valentina Drag Race memes in case you still can’t get enough of those, either.

There are a few things that excite Tyson. These things include the upcoming Ocean’s 8 and video games. But don’t forget his playtime with hot men like Liam Knox.

Jay sure does spend an awful lot of time looking off into the distance. The more productive activities that he tweets about include celebrating his birthday on rooftops and cleaning out content on his phone—which leads to these pec-tacular videos.