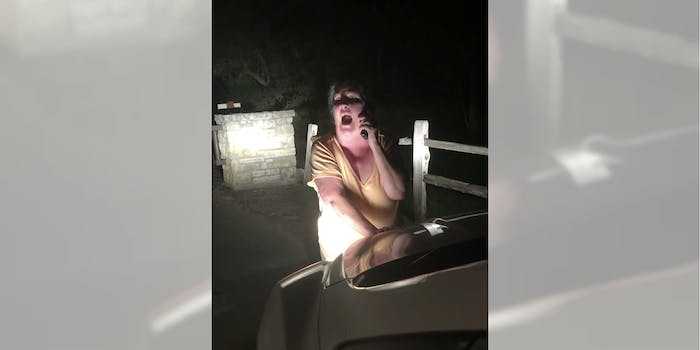 Gate attendant caught on video lying about being run over, gets fired

The driver got it on video.

A gate attendant at Lake Georgetown lost her job after she called 911 on a visitor, claiming that he was running over her. He wasn’t.

Chris Hampshire posted a video on YouTube and later on Facebook revealing that he did not, in fact, run over the attendant.

“This is what happens when you steer down the wrong exit at Lake Georgetown,” Hampshire wrote in the post. “This park attendant happened to be outside and told me she was calling the cops over that… situation ensued, that’s when I started recording.”

In the video, the attendant can be heard suddenly screaming into the phone, “Ma’am! Ma’am, he’s running me over!” She continued to scream at the 911 responder and yell for a man named Mike to come help her. Hampshire appeared to be standing with the car door open and was not in the driver’s seat.

According to Hampshire’s post, he was stopped by police shortly after leaving the lake. “Thankfully the cops were calm,” Hampshire wrote. “After I showed them the video, they understood my perspective completely and let me go.”

The Fort Worth District’s U.S. Army Corps of Engineers issued a statement addressing the incident. “We neither condone nor support this sort of behavior by our employees or contractors,” the statement reads. “The incident occurred on August 25 and the gate attendant is no longer at the park or providing contracted gate attendant duties at any of our lakes.”

Hampshire did not immediately respond the Daily Dot’s request for comment.