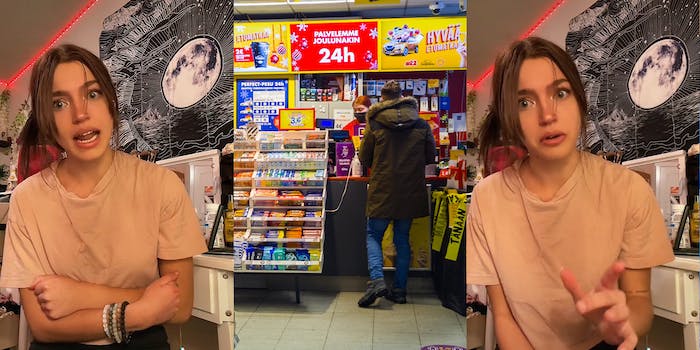 ‘I hate being a f*cking girl’: Gas station worker details the relentless sexual harassment she experiences in one shift

'You shouldn’t have to change your job because of men.'

A gas station worker tearfully details the multiple instances of sexual harassment she experienced during one shift in a now-viral TikTok.

In the video posted by TikToker Kai (@h8.k8) on Saturday, she says the harassment began with “middle-aged men ‘complimenting’ [her] in very weird ways” during transactions and a man saying he would “come back later” after she refused his help taking out the trash bin.

“In the thirty minutes span that it takes me to empty all nine trash cans, three motherfuckers drove by and whistled at me and catcalled me,” Kai says in the clip.

“Buy your shit and leave,” Kai says. “I’m really trying to keep myself composed right now but the end of my shift is really what set me off.”

As she was clocking out, Kai says that a man was standing behind her making a “very disgusting face.”

“I give him a weird look and he goes, ‘You need to lighten up pretty girl,'” Kai explains. “I should have said, ‘Shut the fuck up,’ but I just kept walking.”

Kai adds that as she was walking to her car after her shift, a truck full of men “drove next to [her] slowly” and whistled and “yelled obscene shit” at her.

“I hate being a fucking girl, bro,” Kai says at the end of the clip. The video is captioned, “very upsetting. men can stay out of my comments on this one.”

The video has amassed over 2.5 million views as of Thursday, with commenters sharing their own experiences of being harassed as women working in customer service jobs.

“I work customer service at a grocery store, people were absolutely ridiculous today. I’m so sorry,” one user wrote.

“I almost got kidnapped at my job. I work at little Caesars and he about pulled me through his car window,” another shared.

“Why do men think this is okay. I’ve been followed home from work before. We aren’t allowed to live our lives without being constantly on high alert,” a third added.

Several men in the comments called out the behavior of the customers, encouraging others to stand up for women when they witness harassment.

“Things like this is why I’ve randomly pretended to be a father, uncle, family friend, etc to girls at places like where you work,” one commenter wrote.

“As men, we really need to do better. Just let her clock in, get money, and let her comfortably leave. I hope your next job will be way safer than this!” another said.

In a video responding to a comment that suggested she “apply to different jobs,” Kai explains that the gas station she works at is “a joint grocery store and gas station” and she doesn’t have a choice because they are understaffed and she is one of the only employees trained to work the gas station.

“If I want hours, it has to be out here. If I want money and I want my job, it’s what I got to do,” Kai says in the clip. “I make good money. I make pretty decent money where I work and I’m not going to just go and be able to find a different job that pays me the same or more as they do right now. I can’t take a pay cut.”

The Daily Dot reached out to Kai via TikTok comment.