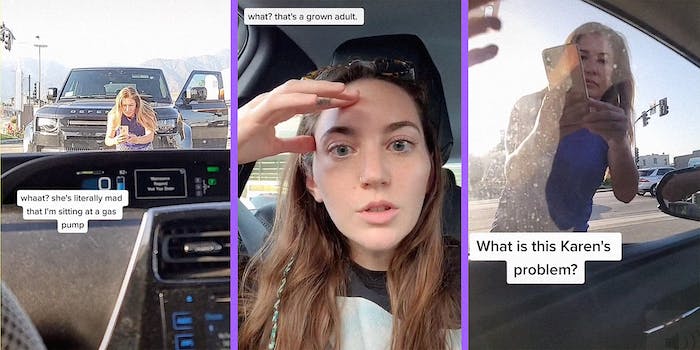 ‘I want that one!’: ‘Karen’ flips out on TikToker over gas pump

A video shows a woman dubbed a gas station “Karen” lashing out at a TikToker because she couldn’t use a specific pump to fuel her car.

Filmed and posted by user @evergreenandmrsn, the video shows the woman filming the TikToker as she’s sitting in her car at a Los Angeles gas station.

The person filming rolls her window down as asks the other woman what her problem is. The “Karen” points toward the store while saying something that concluded with “bitch.”

The woman parks her Land Rover Defender directly in front of the TikToker’s car, but the video shows several pumps open and available for use.

“I literally pumped gas then was looking up directions on my phone,” @evergreenandmrsn explains. “There were like four pumps open, and she literally screamed, ‘I want that one.'”

In a subsequent video, she says the “gas station Karen” went inside making demands, but the attendant told her to use another pump.

“She has a kid in the car!” @evergreenandmrsn says in a follow-up. “Like she left a whole ass child in the car to go throw a fit. She was yelling inside of her car, yelling outside of her car, laying on her horn. That’s so embarrassing.”

Concluding the video, she says, “No matter how much money, Range Rover, Lululemon she has, she will never be able to afford the amount of therapy that child is going to need for having her as a mother.”