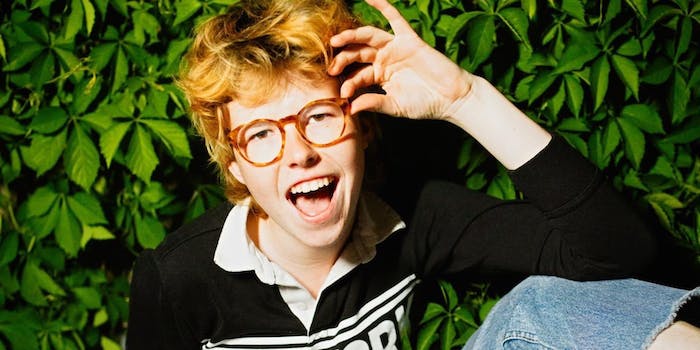 For comic Gara Lonning, reluctantly owning boobs is part of the joke

After the pandemic shuttered bars, the multi-faceted performer turned to podcasts and a newsletter.

As Drag Annie, Gara Lonning struts on stage in a red dress and black block-heeled ankle boots. A red, curly-haired wig—reminiscent of orphan Annie’s signature hairdo—lays topsy-turvy atop their own faded blonde mane. Lonning, who uses the pronouns they, them, and their, drops into the splits, flopping over their right leg for dramatic effect during a performance at Subculture in February 2020 in New York City.

Sixteen years of dance training allow Lonning to execute the physical comedy with ease. They flail their arms, jump across the stage, and drop into a backbend. Lonning is gender nonbinary and uses the experience of walking through the world that way as fodder for every aspect of their comedy.

After the coronavirus pandemic shuttered weekly live shows at the Pianos Bar on the Lower East Side, the 24-year-old comedian and performer’s bold stage presence moved online. They organized a Zoom show in March, and throughout the summer, they appeared at a handful of outdoor shows.

Now, Lonning reaches fans virtually by co-hosting We’re Having Gay Sex, which is billed as a “queer sex positive podcast” that straight people can listen to. A newer project, En(ba)by: A Podcast About Gender, features Lonning in conversation with their friends, roommates, and kindred spirits Maggie Dunleavy and Basil Lee.

In advance of the En(ba)by podcast, Lonning started a newsletter of the same name on their own in October. In it, they detail coming out as a myriad of gender and sexuality labels, owning their first chest binder, their relationship to their femininity, and being a boy who bleeds, among other nuances they experience as a nonbinary person. Lonning’s newsletter has over 580 readers.

Sitting in their favorite chartreuse, patterned chair in their New York bedroom—which they swear they’ll hand down to their nonbinary children someday—Lonning drinks a glass of white wine during a virtual interview with the Daily Dot. They are reminiscing about the first time they drank alcohol with a “bunch of queers in a barn in the middle of nowhere” outside their hometown Decorah, Iowa.

“I came home in the morning and told my parents,” Lonning said. “My mom went, ‘Why would you tell us that?’”

“They grew up pretending their life was like a movie,” recalls Moran Lonning, their older sister. Back in Decorah, Gara would play melancholy music when they felt sad and pretended they hated pizza just to be different from their siblings on pizza night.

Moran calls Decorah “its own little bubble of perfect life” where Lonning colored outside the lines.

Gara Lonning’s campaign to set themselves apart worked: When they came out as trans/nonbinary on Facebook in September, an old neighbor commented, “I always thought you were an interesting person.”

“And I was like ‘Man, I guess it just confirms … that other people saw that I was different,’” Lonning said. Even learning the word “nonbinary” was a revelation because it encapsulated doubts Lonning had had their whole life.

Popular depictions of transgender folks tend to be of transmen and transwomen rather than gender nonbinary individuals. And yet, by last year, one in four of 34,000 LGBTQ youth surveyed said they identified outside the classifications of male and female, according to the Trevor Project’s National Survey on LGBT Youth Mental Health.

Lonning’s twin brother, Gable, was the only exception to how different Lonning felt from everyone else. The fraternal duo was more alike than even the identical twins in their middle school and high school, Lonning reminisced in a virtual interview. “He is a very feminine, soft guy,” Lonning said. “And I was a very masculine, scrappy girl.”

Part of their tight bond came from their shared love of performing. Lonning was so obsessed with getting cast on Saturday Night Live that at the age of 20, they carried around a copy of Tina Fey’s Bossy Pants and scribbled notes to their future self in it.

But when Lonning was with Gable, Lonning became the audience. Gable made Lonning laugh so hard, they could hardly finish a sentence. While unease was what Lonning mostly felt around other high schoolers, and even around Moran, Gable was like a moon always comfortably in Lonning’s orbit.

Their senior year, Lonning was accepted into The New School for Drama, and Gable was enrolled at New York University’s Tisch School of the Arts. “And then my very sweet parents were like  … you’re going to move to New York and we’re going to move with you,’” Lonning explained.

Soon, the Lonnings were at home 35 minutes outside of the city. But the day before Lonning was supposed to start college, their father broke down and said the family couldn’t afford tuition. Although Lonning was rattled, they realized another path to becoming a comedian was within reach.

Lonning enrolled at the Upright Citizens Brigade, a New York-based comedy training center where Broad City’s Abbi Jacobson and Ilana Glazer got their start. Lonning paid for classes by doing “minimum wage dirty work” in the suburbs, which included teaching at a dance studio and working as a receptionist at a local workout studio. At 21, Lonning moved to New York City. They never reapplied to college.

Lonning and Gable tried to collaborate on a couple of comedy projects, but Gable’s perfectionism clashed with Lonning’s willingness to try, fail, and try again. “He just was dragging his feet, and then it became Gara pulling him along,” said Moran.

Lonning categorizes the collaboration as unhealthy and said the pair ultimately needed to separate. At the moment, Lonning and their twin brother are no longer speaking.

“I know that this is just a rough patch and Gable and I will come together at some point,” Lonning said. “Not being connected to your literal other half is very lonely and very isolating.”

Although Lonning initially planned to pursue improv, their father, who Lonning calls “less of a dad, more of a coach,” pushed stand-up instead. By the time Lonning moved into the city, they were performing it in Manhattan nightly. The goal was to get an agent and eventually perform on The Tonight Show. But there was a hitch.

“As I started discovering I was nonbinary, the spaces I hung out in were just not super accepting,” Lonning said. “There was just like a lot of comedy guys who have this attitude of ‘You work hard, you put in your hours, you don’t talk too much about being queer.’”

So Lonning shifted to Brooklyn, a separate comedy scene where they felt freer to explore a mix of dance comedy, sketches, and song that became the backbone of their weekly show at the Pianos Bar.

Alongside fellow comedian Emily Evans, Lonning hosted The Pantyhoes Show during which the duo featured performances from “comedians and artists who are not cis white males.” The show included singing, lip-syncing, dancing, drag performances, sketches, stand-up, and a lot of poking fun at comedy tropes. In December 2019, Lonning switched gears and ran the program as The Sophomore Show.

“It felt fun and open atmosphere to make jokes and just like have a good time and like be gay,” said Cena Loffredo, a sound engineer who worked Lonning’s show and said they always “laughed my butt off.”

As a co-host of We’re Having Gay Sex with comedian Ashley Gavin, Lonning creates safe, goofy, and explorative spaces for the queer community. @BabyGara, the (self-appointed) leader of Lonning’s fan base first heard Lonning on the podcast in the spring of 2020. Lonning’s public journey of discovering their gender identity encouraged @BabyGara, who’s a teenager, to come out as nonbinary and embrace their authentic self.

“I was like ‘Whoa, this person is really funny and amazing and they’re so genuinely themselves.’ And that was something I wanted for myself,” said @BabyGara, who asked to be identified by their username for this article.

Similarly, Lee and Dunleavy’s friendship led Lonning on the path of self-discovery to coming out as nonbinary. They were the first nonbinary people Lonning met who had similar lives and backgrounds. “[Basil and Maggie] really pushed me … to acknowledge and find that part of myself,” Lonning said.

Lonning, Lee, and Dunleavy host Lonning’s latest venture, En(ba)by: A Podcast About Gender, which was launched in October. Debut episodes include uproarious banter among the trio as they discuss the fluidity of their gender identities, chat with nonbinary and/or genderqueer guests, and answer questions from listeners about all things outside the gender binary. Lonning shared that over the podcast’s first two months, weekly episodes have garnered over 1,000 downloads.

On one recent episode, Lonning, Lee, and Dunleavy chatted about their experiences connecting with family during the holidays, which they note affects the ebb and flow of their gender expression and perception. In between laughter and a cappella versions of ‘90s hits that make them feel gender euphoria, the co-hosts got vulnerable about how they plan to nurture their gender identities in the coming year.

“So much of the media surrounding trans stories just all have to be tragic,” Lonning said in an interview. En(ba)by is an effort by Lonning to expand the trans narrative by celebrating instances of and telling stories about gender euphoria.

Though they combine comedy with talking about their gender identity, as Lonning has done with their newsletter and podcast, Lonning clarifies that teaching others about being nonbinary isn’t their driving force. Put simply, being open about their gender expression with humor makes Lonning happy.

“I’m really weird about different parts of my body. I hate my boobs, I do. So I bought a binder,” Lonning said during a performance at New York City venue Sisters in February. “To organize all my genders in!”