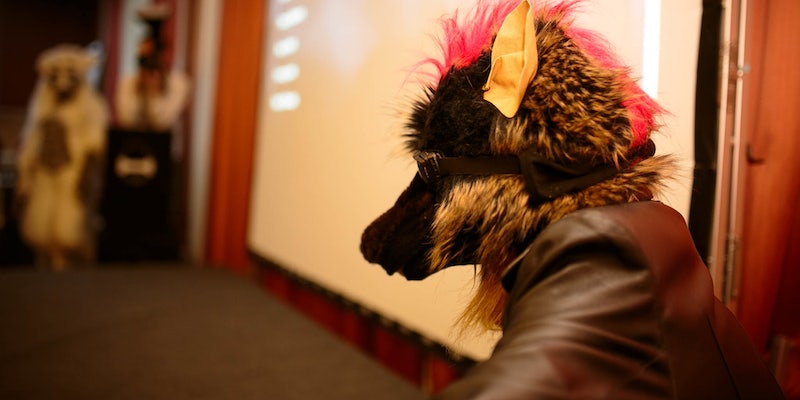 What’s a fursuit, and what does it have to do with a murrsuit?

There's a big difference between the two.

When most people hear the word “furry,” two things come to mind: fursonas and fursuiters. Fursonas are anthropomorphic original characters that furry fandom members create to express themselves through visual art, fiction stories, and role-plays. Fursuiters, on the other hand, are furries who enjoy wearing elaborate costumes of furry characters (sometimes of their own fursonas) at conventions and meetups.

Stereotypes abound about fursuiters, and many of them go as far back as the furry fandom’s early online days. Most imply fursuiters purely wear their suits as a kink. But the idea that fursuiting is just one huge fetish is a myth. Certainly, there are furries who enjoy wearing a fursuit for sexual reasons, but there’s a distinct word for the practice: murrsuiting.

What goes into fursuiting, and do all furries like wearing fursuits? Read on for our guide to fursuits, fursuit makers, murrsuits, and etiquette tips for all three.

What is a fursuit?

According to WikiFur, Fursuits are “animal-based costumes associated with the furry fandom.” Furries who enjoy wearing fursuits commonly create or commission suits of their own fursonas with the intention of taking them to conventions, furry events, geek conventions, or doing photo shoots and modeling, if not all three. Most fursuiters enjoy creating or commissioning fursuits of their own fursonas, although this isn’t always the case.

The most commonly recognized fursuit is the “fullsuit,” or a fursuit that covers its participant’s entire body from head to toe, artist community resource Artists Beware writes. Traditional fullsuits vary in terms of padding and artistic style, from cartoonish anthropormorphic characters to realistic fur and attributes.

Other common fursuit structures include the “partial” fursuit, such as a head with a tail or paws, and the Japanese kigurumi, an increasingly popular “alternative for heavier, hotter, more movement-restricting, and expensive fursuits,” Artists Beware notes.

Despite popular belief, fursuits are not used exclusively for sex, although some fursuiters enjoy fursuit sex or have specific fursuits for having sex.

How many furries wear fursuits?

There’s no census for the furry fandom, so it’s impossible to know for sure how many furries wear fursuits. FurScience ran a survey at Anthrocon 2018 on furry paraphernalia ownership and found “45.8% of furries owned a partial or full fursuit.” This contrasts sharply with a 2011 online poll that found only 25% of furries partially owned a fursuit, and less than 15% had a full one (although nearly half planned to own a partial or full fursuit).

FurScience cross-examined the two studies and suggested that sample pools and socioeconomic status may impact how many furries report owning a fursuit.

“One likely reason for this difference between convention-going and online furry samples is the fact that those who own a fursuit will be drawn to conventions, where they have the opportunity to wear and display their suit in public,” the study noted. “Another possible explanation is the fact that fursuits are often prohibitively expensive, and furries who are able to afford a suit are also more likely to be able to afford the expense of traveling to attend a convention.”

There are many different reasons why furries wear fursuits, and no two furries share the same motivation. However, FurScience found some common patterns among fursuit owners: The “vast majority” agreed that they felt more confident, cared less about what others think of them, and found it easier to interact with strangers and meet new people while donning a fursuit.

“Taken together, the statements seem to support the idea that many fursuiters feel a sense of confidence and disinhibition (i.e., freedom to be themselves, freedom from social norms) when suiting, and find it easier to interact with others when doing so,” FurScience reported.

How much do fursuits cost?

Commissioning a fursuit can be an intense, expensive process that involves careful communication with a fursuit maker. According to listings on The Dealers Den, commissioning a custom fursuit head can range from $170 to $500, and additional elements like paws can cost $60 to $120. Full suits range from $1,500 to well over $3,000, not including additional costs for digitigrade (“digi”) padding to mirror an animal walking on their toes. Buying a pre-made suit isn’t cheap, either. The Dealers Den lists these from $500 to $4,600, depending on the quality and level of detail. For more specific examples, Artists Beware suggests visiting FursuitReview.

Creating a fursuit yourself can also be very expensive and requires the skills and expertise necessary to understand what resources you need and how to pull them together into a suit. Creating them is a heavy time investment, too. Fursuit creator Orion, told Vice that their first suit took three months to assemble. “When I go at it full force, I can do an entire body in one day. A head is two days,” Orion said to Vice. “But on top of a normal retail job, you have to break it up… I’ve made nine [fursuits] to date.”

For additional information on buying or commissioning a fursuit, see Artists Beware’s five-part guide to the process, including finding a fursuit artist and calculating the costs involved.

Now we’re getting to the fun part.

The term “murrsuit” “generally refers to fursuits of a sexual nature,” WikiFur explains. The term itself is loosely applied and can refer to different types of sexual fursuits, from those designed with strategically placed holes to standard suits that are occasionally used for sex.

But it’s inaccurate to say that fursuits are synonymous with murrsuits, an many fursuiters do not engage in sexual activity in their fursuits. However, there’s certainly an overlap between fursuiters who are murrsuiters and vice-versa. Fursuit makers may also create murrsuits, although this varies.

“Several fursuit builders are known to make such suits, though not all will advertise their willingness to do so,” WikiFur notes. “Others are home-made, or alterations of an existing suit (though builders will often void any warranty on a suit which has been modified or used for sexual activity).”

Murrsuiting is slightly taboo in the furry community, although in recent years, it’s become more visible and accepted. In an early March video on the phenomenon, furry YouTuber Nos Hyena says the “number of murrsuiters are small, but not as small as one would think.”

“It’s OK to like furry things sexually,” Hyena says in the YouTube clip. “As long as you’re into it and it’s not harming anyone else, absolutely go for it.”

“With softsuits, I just try to avoid the things in murrsuit content that normally squick me- some examples being a lack of artistic direction and the jarring contrast of realistic human genitalia visible through a hole on a cartoon body,” softsuits wrote in 2018. “So, I guess softsuiting is murrsuiting with some artistic direction. but that feels so… pretentious! Oh well.”

For more information on murrsuit and softsuit culture, check out furry YouTuber Chief Kacey’s murrsuiter and softsuiter roundtable from April.

How do I get a murrsuit?

There are two ways to get your paws on a murrsuit: make one yourself, or commission it. Creating a murrsuit is similar to making a fursuit, and many of the same skills apply.

But fursuit and murrsuit creation takes time and practice. It may be particularly difficult to learn for furries with very little experience sewing or crafting. For most furries, the easiest option is to commission a fursuit maker who creates murrsuits.

Keep in mind that not all fursuit creators are comfortable making murrsuits. Others may be open to murrsuits and murrsuit modifications, but would rather customers ask for these features upfront.

When researching fursuit creators, check their FAQs section and see if they have any stipulations about adult usage of their fursuits. Alternatively, consider sending an email inquiring about murrsuit modifications in general, professional terms.

I want to meet fursuiters at a furry con. What should I know?

Whether you’re a convention pro or novice, you’ll probably have to wait a while before attending a furry con. COVID-19 has shut down conventions for the year, and closures are likely to continue into 2021. But if and when you do get yourself in a situation with a fursuiter, you’ll want to read up on basic fursuit etiquette first.

Orlando’s Megaplex furry convention has a comprehensive guide to fursuiting for all attendees, including interactions intended and otherwise. For examle, you should always ask before touching a costume or running your fingernails against it (also called “scritching”). There’s still a human underneath a fursuit, too, and their line of sight and hearing are significantly limited when they’re in a suit, which means you should never sneak up on or crowd around a fursuiter.

“Avoid tackling, pouncing, or playing roughly with performers unless they say it’s OK,” the guide notes. “Unpleasant odors do have a way of lingering on fabrics, so be considerate if you have recently been smoking. Similarly, grease has its way of leaving its mark on fabric.”

Most of all, treat a fursuiter as a person, not an object. Ask before you touch them or give a hug, and understand that the bulky, socially intense actions that come with fursuiting means things might feel a little awkward.

I don’t want to meet fursuiters. Help me!

Look, if fursuits are just a little too weird for you, that’s real. So how do you go about avoiding them at conventions or geek events? CityMutt provides some resources for the fursuit-squeamish. In short, just walk away, explain that fursuits make you uncomfortable, or warn someone from the fursuiter’s entourage that you’d prefer not to interact with them.

“It doesn’t make you a bad person or furry just because fursuits make you uncomfortable,” the site explains. “The first thing you have to realize is that most fursuiters are not ‘out to get you’ and they often cannot tell if they are making you uncomfortable. Fursuits have very limited vision, so they may not be able to see your face or body language. They may also be unable to hear you unless you are very close to them or shouting.”

Be considerate of the fellow attendees in your space, and if you feel uncomfortable, speak up. If you’re at a furry convention, seek out staff for aid. They’re well equipped to defuse stressful fur-to-fur conflict.