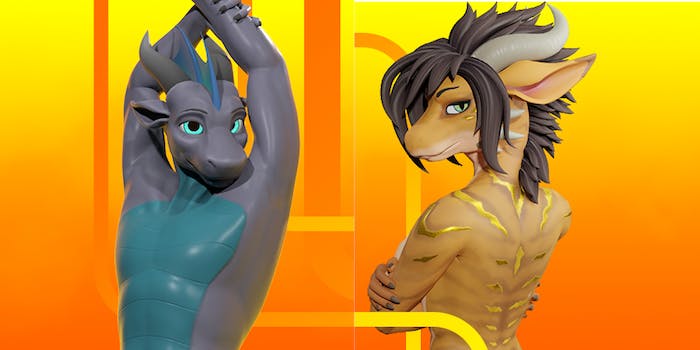 It has realistic physics above and below the waist.

Heat developer Edef originally began looking into virtual reality after
he became interested in bringing his fursona, Emerson, into VR. These
initial experiments gained his fans’ interest, and Heat “naturally
evolved” from the process, he told the Daily Dot. Nonetheless, the
game’s success on Patreon remains “a pleasant surprise for sure.”

“We knew we had something really cool on our hands but had no idea how
viable it really was,” he said. “It was great to see that the VR market
was mature enough to allow something like Heat to exist.”

Heat’s interactions are pretty dynamic. A clip from developer Edef shows how the game lets the player “boop” Emerson’s snoot. Gentle, intimate physical interaction is a huge selling point with Heat, as the game features realistic physics that let players lovingly caress Hera and Emerson from head to toe.

More recently, Heat introduced “oral features”, such as licking characters’ bellies, lips, and more. And yes, for foot fetish fans, you can even lick Hera and Emerson’s toes. Other kinky features include a macro mode (short for macrophilia, a fetish for giants and giantesses) and the ability to draw on the game’s characters. If you have a spare VR tracker, you can even have furry sex with Emerson and Hera (and if you don’t, one of your two main VR controllers will do just fine). Other upcoming features include additional characters “of different body types and genders,” new locations such as glory holes and dark alleys, and additional sex features like bondage sex.

“However, none of these ideas are set in stone. That’s why we have you Patrons!” Heat’s Patreon notes. “You’ll get to influence the features we work on and give us feedback on what you’d like to see next. This game is for you guys!”

Moving forward, Edef and Wiah are interested in adding a horse boy character, “small details” to bring the characters to life, and additional fetishes added into the game. “I’ve had requests for growth, vore, watersports, and bondage,” Edef told the Daily Dot. “Vore is probably too much of a tangent but some more detailed maws aren’t out of the question. All fetish content like that will be hidden toggles though so
it won’t interfere with those who aren’t interested.”

While Heat is primarily a VR game, it also supports 2D play options for interested players that do not have a VR headset available.

Edef and Wiah, Heat’s two developers, originally required $5,000 per month to develop Heat full-time; it’s now the 20th-highest-grossing adult game on Patreon among creators who publicly divulge their monthly earnings. That’s particularly impressive given Heat’s Patreon only launched in May 2020. And while Heat’s popularity may befuddle non-furs, the game’s popularity can be attributed to two key factors: its realistic sexual mechanics and its appeal with furry fans themselves.

“‘I’ve been in the furry scene a long time and I’ve always dreamed of creating my own furry game,” Edef says on Heat’s Patreon. “It’s finally time to make that dream into a reality. I’m a generalist programmer with years of experience in the indie gaming scene and I have the knowledge necessary to take this game to greatness.”

Try out Heat by subscribing to the game’s Patreon.

Update 1:50pm CT, Oct. 6: This article has been updated with quotes from Heat developer Edef.