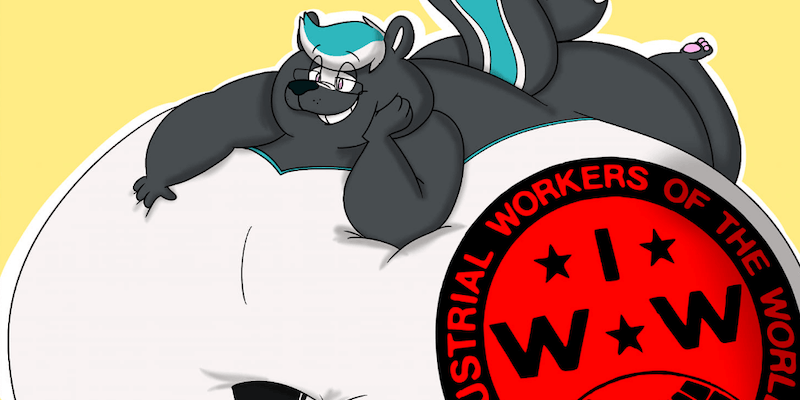 'Is someone going to tell them?'

The Industrial Workers of the World (IWW) posted what’s been described as furry fetish art to one of its official Facebook pages.

The international labor union posted the image to its Greater Chicago affiliate page. The incident went semi-viral after someone posted it to Twitter.

“Is someone going to tell them?” Twitter user @spacedrugs asked, along with a screenshot of the post.

As for the image itself, it depicts “fatfur,” a furry fetish involving a cartoonish style of fat. A hyper-obese skunk is laying on top of a struggling hamster, reaching for a bag of money. “Squash the boss” and “unite your workplace” decorate the top and bottom of the image. Jay, who commissioned the art and requested to use a pseudonym for this article, said it was a response to far-right politics they’ve observed in the furry fandom.

“I see far-right furries involving politics and laugh my ass off, so I thought it’d be funny to do it for politics me and my friends actually like,” Jay told the Daily Dot. “Most of the fandom (as far as I know) leans fairly left-wing already (though maybe not to the extent me or my friends are), and I felt like people might get a laugh out of it.”

Jay didn’t expect the art to make it beyond their circle of friends but has been pleasantly surprised by the welcoming reactions to the art.

“I didn’t really expect the image to spread as far as it did,” they said. “And then I found out this happened while I was in class and laughed my ass off. I’m [definitely] comfortable [with the spread] at this point. It’s nice to see that non-furries are seemingly chill with it, especially considering that it’s just flat-out fetish art.”

Some have put the art into a humorous context. “Socialism is finding a boss who’s also a pathetic worm who deserves to be squished under giant feet or something,” Twitter user @jmtryneski commented.

Socialism is finding a boss who's also a pathetic worm who deserves to be squished under giant feet or something.

When asked why they specifically chose to adorn the skunk with the logo of the IWW, Jay said it’s because they simply believe in the cause.

“I feel like a hammer and sickle would’ve been seen by most people… as voicing support for the USSR, which is very much not something I want to do,” Jay said. “Plus, the IWW is still active today, I’ve got a fair number of friends who are a part of it, and once I’m more financially stable I plan to join it myself. The IWW is a sign of attainable change in our future.”