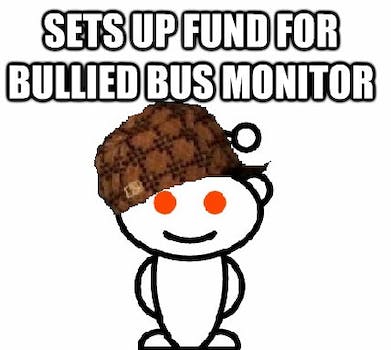 Now that the fundraiser for Karen Klein has reached more than 100 times its original goal, some redditors are asking "Isn't this a little much?"

A bullied school bus monitor who received hundreds of thousands of dollars from sympathetic redditors has prompted a strange question—how much charity is too much charity?

Thousands of redditors were understandably upset after they watched a ten minute video of children in Greece, NY, brutally harassing 78-year-old Karen Klein. One, Max Sidorov—Heavyballsareheavy on Reddit—set up a fundraiser for Klein and encouraged users to donate money to “give her a vacation.” He set the goal at $5,000.

Users gave. And gave, and gave, and as of this writing, Klein stands to receive over half a million dollars. The fundraiser is set to run until July 20.

John Bickford of Peabody, MA even set up a petition to implore President Obama to waive the income tax Klein would normally pay on the donation. As of this writing, it’s rapidly approaching its 7,500-signature goal.

“It may be the case that the president doesn’t have the authority to do this, but surely someone does,” Bickford wrote.

Some redditors aren’t as enthusiastic about the charity campaign, however.

“Isn’t this a little much?” asked user aryeo late Thursday evening. “There are hundreds of charities and organizations that could benefit from the help.”

One redditor, sawace, was clearly jealous, hinting that she and her fiance deserved some the money that went to Klein.

“My fiance is[…]24 and has Testicular Cancer,” she wrote, and noted they’re “barely making bills.”

“I’ve cried too from bullying,” sawace added. “That doesn’t mean that 300k should fall in your damn lap.”

“My father has cancer and he’s a 68 year old man,” wrote FIU_randomkid. “We’ve never gone back to our home country and I doubt we will, seeing as how my dad is sick and that’s the only reason we even want to go.”

Others argued that it’d be impossible to help everyone, and noted how giving to Klein specifically could be rewarding for many users.

“I think she reminds many of us of our grandparents, and how we saw them age and endure setbacks and possibly struggle financially,” wrote MisterMet.

Giving to Klein gives users “a chance to give what we couldn’t give our grandparents,” he added.