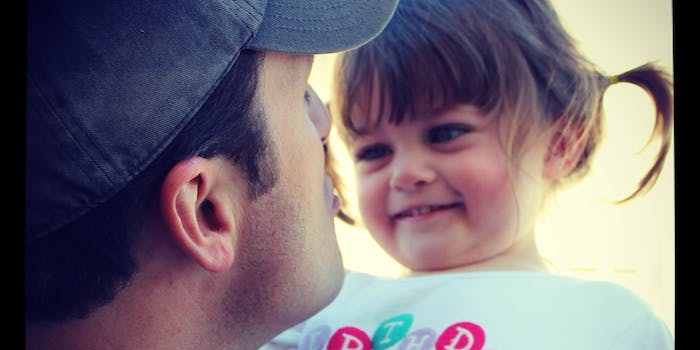 “Honestly, I read these names and most of them I don’t know. And people admit when they’re donating that they don’t know me."

On April 4, Larry Carroll, a writer and producer based in Los Angeles, woke up to a real nightmare. His 2-year-old daughter, Savannah, had mysteriously passed in the evening, alone in her crib.

He’s still not sure what happened, even now. The family is currently awaiting blood tests, hoping it will lead to provide some insight. That night, after an unimaginable day of first responders, coroners, and later trying to explain what happened to his 5-year-old son, Carroll sat down at his computer and started to channel his sorrow.

“My fatherly instincts and my husbandly instincts just made me really want to show my wife that there was a reason to smile again and show my son that this story could have some kind of happy ending,” he told me.

What came out of his writing was Savannah’s Stolen Moments, a fundraising campaign set up through Fundly so that another family could have an opportunity to treat their daughter to something special that they wouldn’t have otherwise been able to afford.

Carroll’s message is raw and emotional. There are no flowers that can comfort him, no donation to charity that will ease the sense of loss. He’s frustrated and feeling helpless.

If you’ve never dealt with loss, I sincerely hope that you never do. If you have, then you know the worst feeling is the sense of helplessness, of frustration. The only thing you can do, it seems, is admit that you have no control. And when you’re a parent—the person who is supposed to be able to make everything better—that’s a horrifying thing to admit.

For Carroll, the “stolen moments” were those unplanned moments in life, the ones that would eventually turn into lifelong memories. Savannah was a happy and healthy baby who was friendly towards strangers, considerate, and already had Carroll wrapped around her little finger.

He can’t help but imagine what those moments would’ve been like. He already knew he wouldn’t be able to say no when she wanted to drive the car at 16. He thought she was stubborn; his wife thought she was determined “It’s easy to be like, your children will remember birthdays, Christmas, Thanksgiving,” he said. “Make sure you’re there for that, but when it’s a random Tuesday in the middle of March and I’m driving her home from the doctor’s office, and sure, I’ve got errands and things that need to be done like everyone else, but that’s when I try to think, ‘Now’s a good time to steal a moment.”

He thought that $10,000 would suffice for the campaign. Maybe the family would go on a vacation to somewhere like Disneyland, and if he exceeded his goal, the rest of the money could go towards starting a college fund.

The only requirements were that the family “have a little girl, that they very clearly love her, and that they don’t have the financial means to typically do this sort of thing.” If he couldn’t have one more stolen moment with Savannah, then at least he could help another family make that happen.

Then something incredible happened.

The emails and the money started pouring in, and he reached his goal in a matter of days; as of press time, Carroll has raised over $34,000. The messages came from people who read Savannah’s story, who found it from family, friends, coworkers, and even complete strangers. There was something about Savannah that resonated with people. “That’s kind of the amazing thing about this fund,” Carroll said. “Honestly, I read these names and most of them I don’t know. And people admit when they’re donating that they don’t know me, and that’s just amazing. It speaks to the power of social media, social networking, sure, but it also speaks just to the generosity of the human spirit. It’s breathtaking sometimes.”

It even caught the eye of Fundly itself.

“We all kind of saw it,” Veronica Olah, Fundly’s community manager, told me. “Our whole team immediately gravitated towards her and it touched all of our hearts, so we made sure to reach out and help Larry and his family as much as we could.”

Carroll is unsure of how he will eventually choose the family, but he hopes that they will eventually be able to meet with his family and talk about their stolen moment and Savannah.

“Somebody wrote yesterday on our Facebook page, or maybe it was the Fundly page, that Savannah will be the guardian angel for whoever this girl may turn out to be,” Carroll said. “And I think that was a really nice thing to think about.”

All photos via Larry Carroll