The heartwarming story behind that ‘Frozen’ cake everyone is laughing at

Before you mock this 'Frozen' cake, you need to know its surprising backstory.

The Internet mercilessly mocked an unfortunate-looking Frozen cake this week, but it appears that this is an instance where the thought truly does count.

Side-by-side photos were posted to Reddit with the caption, “The cake that was ordered and the cake that arrived,” comparing the disparate creations. 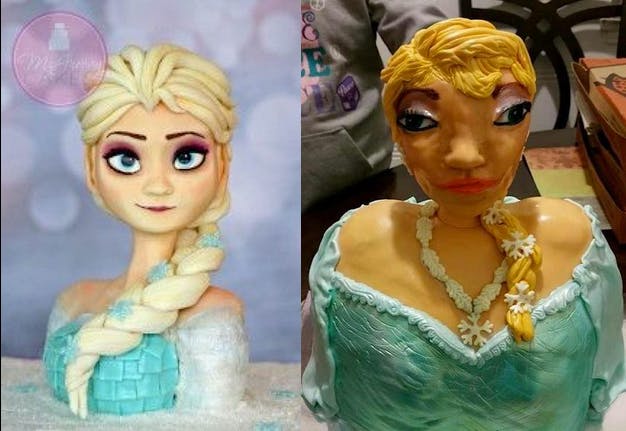 It’s admittedly a jarring comparison: On the left, an artfully crafted cake in the shape of Princess Elsa from Disney’s Frozen. On the right, a barely recognizable version of her.

Naturally, Reddit users piled on to mock the lesser cake. “Looks like a fly got in the teleporter with it,” wrote one user. “Does the purchase price include three free counseling visits for the kids at the party?” another added.

The highest-voted comment on the original thread acknowledges the amount of work that went into the cake, but it’s still a derisive observation: “The sad thing is, as horrific as it looks, someone put serious time into making that cake. Every misshapen blob, every terrifying curve and flourish. There are hours and hours of terrible craftsmanship here.”

This is a sentiment indirectly echoed by Shawna McGreevy of McGreevy Cakes. She assembled the more glamorous cake and chimed in to offer her support to the derided version.

“I think someone tried,” she wrote on Facebook. “I think someone had the guts to go for it…even when, I’m sure, they didn’t know if they could pull it off. They took the chance anyway and put themselves out there.”

But it turns out that someone really did put a lot of time and effort into the less attractive cake—and for a very good cause.

The cake was created through an organization called Icing Smiles. It’s a nonprofit organization that solicits volunteer help in baking birthday cakes for terminally ill children and their families.

“We understand that the simple things, like a birthday cake, are luxuries to a family battling illness,” reads the organization’s self-description on its site. “Our goal is to create a custom cake for the ill child, or their sibling, that provides a temporary escape from worry and creates a positive memory during a difficult time.”

Lisa Randolph Gant made the cake for Icing Smiles that’s being taken to task. She’s also the owner of a bakery called Let’s Make A Cake and has made five cakes for the charity organization. Her personal Facebook page has been flooded with messages of support from friends and acquaintances.

“Yes I’ve seen all the really mean comments, some even posted by some of my so called cake friends that know it’s my cake,” Gant wrote in a now-deleted post, according to Good Morning America. “At the end of the day, I DIDN’T let that sick baby down. I gave it all I had to give, so make fun [of] me all you…want if that is what you need to do to feel good about yourself.”

There is some good news here: Gant’s debacle has generated a lot of attention for Icing Smiles, which has received more than 200 offers for cake donations. You can donate through this fundraising campaign on Crowdrise.