Will this niche beauty product reach its ambitious Kickstarter goal?

Beauty products rely on the lure of the unattainable. People with straight hair want naturally bouncy curls, people with pale skin want a glowing tan, and everyone keeps falling for the myth that mascara can “extend” your eyelashes.

Historically, many women tried to bleach away their natural freckles with lemon juice or buttercream, but in recent years, freckles have come back into vogue. Now a new Kickstarter campaign aims to bring freckles to the un-freckled masses with a product called Freck Yourself.

Freck Yourself creator Remi Brixton opens her Kickstarter video with the slightly dubious assertion that, to her, freckles are “the mark of rebellious dreamers, wild, adventurous, unapologetic natural beauty.”

Freckles are actually just a sign of increased melanin production brought on by direct sunlight, but if that’s your jam, you can now replicate the look with a roller ball of brown dye and a pack of Freck Yourself stencils. When you think about it, it’s really no weirder that fake tan, and it takes less time to apply. 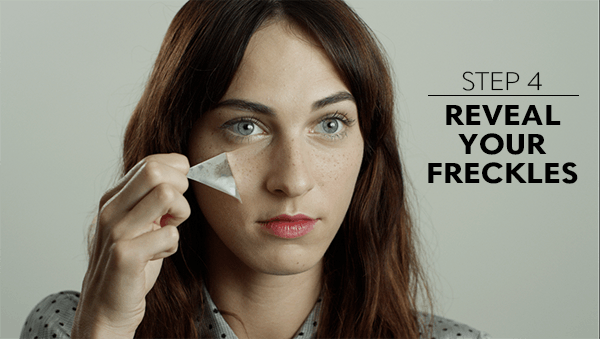 There are already a number of fake freckle makeup tutorials on YouTube, so there’s definitely a market for the faux-natural sun-damage aesthetic.

Unfortunately, Freck Yourself needs several thousand more backers to achieve its ambitious $215,000 funding goal. If freckle enthusiasts don’t pony up in the next three weeks, they’ll have to rely on the old method of drawing them on by hand.