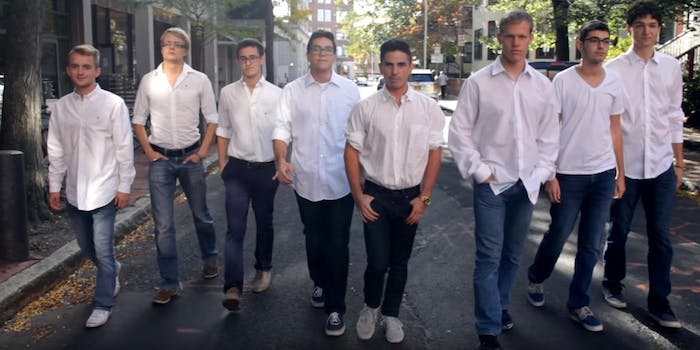 Fraternity parodies sorority videos with laughter and smiling, because only women do that

Apparently when men do what women do, it's comedy

It’s easy to make fun of women for conforming to the societal standards to which they’ve become conditioned. For example, women are expected to wear makeup, and men often make fun of them for taking a long time to get ready.

The Harvard fraternity AEPi continued this tradition with a recruitment video mocking stereotypical sorority recruitment videos. There is lots of glitter and smiling and laughing in circles—because LOL, women, amirite?

It’s not that sorority recruitment videos aren’t ridiculous. Any five-minute promo asking the viewer to essentially join a friend group for an annual fee is going to be silly.

Rather, the problems here are that 1) men doing what women do isn’t inherently comedy and 2) your standard fraternity recruitment video is equally ridiculous.

For instance, look at the macho intensity of Theta Chi at FSU.

And here’s a faux-Reservoir Dogs video from Sigma Pi.

And just look at the bros of Sigma Alpha.

If there’s a lesson to be learned here, it’s this: Sorority girls, get on the parody train! These guys are just begging for you to mock them.