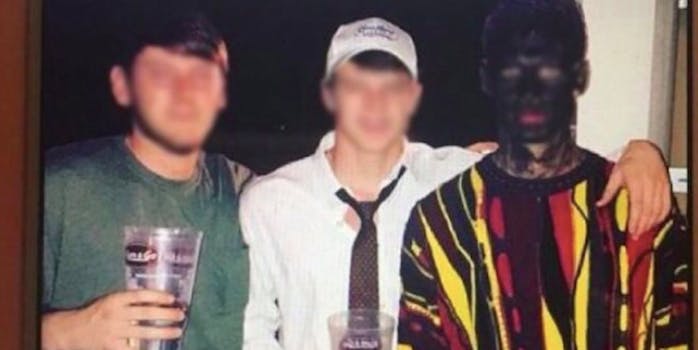 This frat guy wins most offensive costume of the year

The University of Central Arkansas sophomore has since been expelled.

By this point, you’d have to be completely unplugged from social media to not know that dressing up as a racist for Halloween is a bad idea. So if you do, perhaps you’re doing so on purpose, and if you’re the type that gets their kicks by being offensive, maybe you want to win the title of “Most Abhorrent Costume of 2016.”

That seems like the tactic frat boy Brock Denton was going for when he dressed  in blackface as alleged rapist Bill Cosby for a party Friday night. In a now-deleted Instagram photo, he stood in costume, with two other guys, above the caption “It was a bold night.”

The sophomore has since been expelled—and his fraternity chapter suspended—by the University of Central Arkansas, which called his actions “highly offensive and repugnant.”

Denton apologized on his now-private Instagram, captured by college paper the Echo, saying, “I can honestly say I’ve never heard of black face before until today.”

Huh. I guess that “boldness” he was talking about must’ve been that loud ’80s sweater he was wearing.