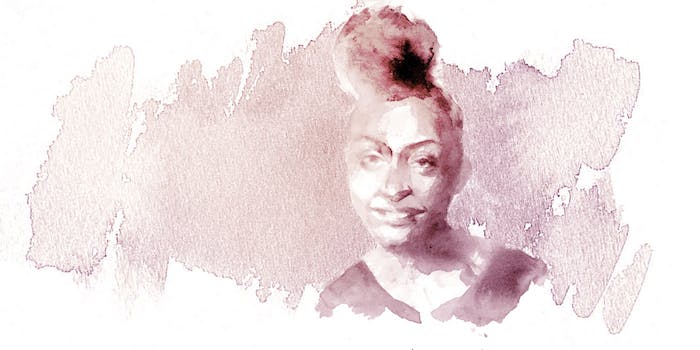 How Franchesca Ramsey is squashing trolls and stereotypes

The haters only serve to justify the need for Ramsey’s presence in media.

The video has been watched nearly 100,000 times since it was first posted. And judging by the over 1,400 dislikes and the many virulent comments saying things like “none of these are white people’s fault, racist,” Ramsey’s straightforward commentary about race in pop culture is strangely controversial—and needed. Her formula is relatively simple: Highlight an enduring discrimination issue, trace its historical roots, and crack a few jokes to keep the mood light while discussing some pretty awful stuff. Why does it bother people so much?

Ever since Ramsey started posting her impressions and parody videos to YouTube, she’s been the target of some pretty intense backlash. But the haters and trolls only serve to justify the need for Ramsey’s presence in media. She’s a young, funny, self-aware, black millennial woman with an impressively straightforward and concise way of breaking down stereotypes.

In the years since she first launched her vlog, Ramsey has brought us everything from hair tutorials to music video parodies, from viral takes on racial stereotypes in “Shit White Girls Say… to Black Girls” to her weekly MTV show Decoded. She’s done impressions like embarrassingly blunt Frannie’s Grannie and condom-refusing bro Marcus and appears regularly on Comedy Central’s The Nightly Show With Larry Wilmore. Her career is skyrocketing: She has approximately 14 different jobs, and she’s only 32.

Franchesca Ramsey is just getting started. While on a rare vacation with her husband in Morocco, she answered Daily Dot’s questions via email.

Why do you think “Shit White Girls Say to Black Girls” resonated with so many people and went so viral?

I didn’t realize it at the time, but micro-aggressions like the ones illustrated in “Shit White Girls Say” are something too many [people of color] deal with on a daily basis. While the video was a mix of conversations I’d had with friends and colleagues over the years, I got tons of emails from people saying they’d had almost the exact same word-for-word conversations with people in their own lives. I think that video was part of a shift in the way social justice and stories about identity were being told online, which was super exciting and a big part of why the video was so successful.

Your subject matter has varied so much: from the “turn your phone” parody of a very annoying thing everyone does, to serious critique of racism in American culture, to beauty guidance. What makes you decide that a particular subject is worthy of your time?

When it comes to picking a topic, it’s usually a mix of my audience asking me to weigh in on something and/or believing I have a perspective on a subject that I haven’t seen broached online yet.

I watched the BBC News segment in 2011 that you referred to as “a little misleading” in saying that vloggers are making millions on YouTube.

Are there YouTubers who are millionaires? Sure. But that’s probably the top 50-100, and that takes A LOT OF WORK combined with some amount of luck. You’ve gotta crank out content on a regular schedule, collab nonstop, go on tour, have merchandise, [and] do regular brand deals on top of netting millions of monthly views. For me, I’ve never been able to stick to a schedule because I bounced around jobs and have never really made YouTube into a full-time career. But YouTube has opened tremendous doors for me like speaking at colleges, hosting my own webseries, and now working in TV.

“I think that [‘Shit White Girls Say’] was part of a shift in the way social justice and stories about identity were being told online.”

I’d say most of us are what you’d call “working YouTubers,” similar to working actors: We have an audience and we aren’t starving, but none of us are retiring at 45. Personally, I think going into any career (especially entertainment) in hopes of being wealthy is foolish. It’s just not guaranteed. As with any art, you have to do it because you love it and understand that money is an occasional great perk.

You made history as one of the first vloggers to participate in a presidential debate. When you asked Bernie Sanders about investigating police violence, do you think his answer was sufficient? And has Sanders done enough to reach and engage with young people of color?

I think Bernie had a great response, but I was mainly disappointed that we didn’t get to hear from Clinton or O’Malley. Despite that, I’m honored that YouTube gave me the opportunity to be a part of the debate. I think Bernie has done a great job of engaging with young people overall, not just young POC. But I think what’s been more impressive is how much young POC have demanded that this year’s candidates hear and address their concerns. Regardless of what you might think of protesting or demonstrating during presidential campaign speeches, at the end of the day, they’re getting attention and forcing the candidates to take them seriously. For example, the Clinton and Sanders campaigns have sat down with Black Lives Matter activists in response to their protesting, and I think that’s huge. This year’s election will most likely be decided by millennials, so it’s exciting to see that today’s young people feel empowered to lend their voices to the issues they feel are important both online and off-.

For a woman who has so many jobs, you still manage to be really engaging on social media. I notice that often you will reply to Twitter trolls, too. Can you explain why it’s sometimes important to you to call out your trolls or respond to them publicly?

Sometimes it’d probably be best to ignore them, but I’m human, and I’ll admit it can feel good to blow off steam and let some random idiot have it.

“As with any art, you have to do it because you love it and understand that money is an occasional great perk.”

For me, I try to make my responses public and composed so that others can hopefully learn from how I deal with negative feedback, whether it’s constructive or totally bogus. More often than not, my response to a troll has nothing to do with them and everything to do with my followers. Often times I hear from my audience that they find it encouraging and even use some of my responses in their on- and offline lives.

What do you have coming up in the next year? Where does this amazing uphill trajectory culminate for Francesca Ramsey?

I’m still pretty new at Nightly Show, so my main goal is to focus on learning as much as possible and pushing myself to be a better writer and performer. I’m having a blast, but I have no problem admitting how challenging it’s been, learning the ropes of writing a daily political comedy show. Thankfully we have an awesome team and everyone’s been super welcoming, so every day I feel like I’ve made some headway and can see my progress week to week. Other than that, June marks the one-year anniversary of my webseries, MTV Decoded, which is super exciting. With Decoded the goal is to just keep pushing forward and challenging ourselves to tackle important subjects in creative and funny ways. Someday I’d like to have my own television show, do some film work, and do more writing and producing.