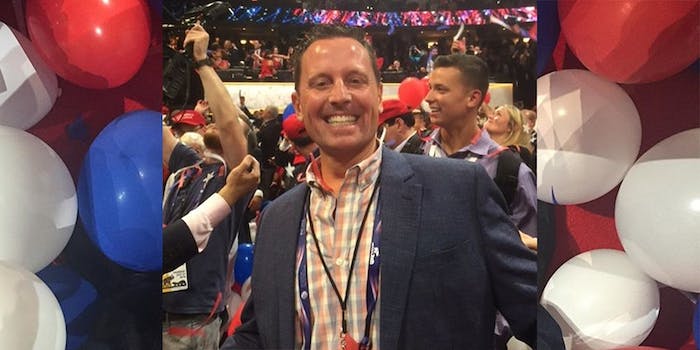 Richard Grenell, former U.N. spokesman, Fox News contributor, and man who has a countdown to the end of the Obama administration on his official website, is facing backlash after suggesting that MSNBC’s Katy Tur slept her way into her job.

In his tweetstorm Friday, Grenell first claimed Tur was in on a coverup of a “smoking gun email” because she was instead covering Donald Trump’s latest sexual assault allegations. He then suggested she is not a “real” journalist because she dated Keith Olbermann from 2006–2009. “Did u intern for @KeithOlbermann or date him?” he asked.

Almost immediately, people began accusing Grenell of being sexist, which he vehemently denied. In one tweet, he called the accusation “ridiculous,” and said, “You don’t get a real journalism job by interning for someone famous.”

Actually, interning for people is exactly how a lot of people get journalism jobs. And while dating Olbermann doesn’t make you a “real” journalist, having a reporting career since 2008 and winning an AP Best Spot News Award does.

The Daily Dot has reached out to Grenell about his comments and will update if and when he responds. Meanwhile, Tur had a one-word response.