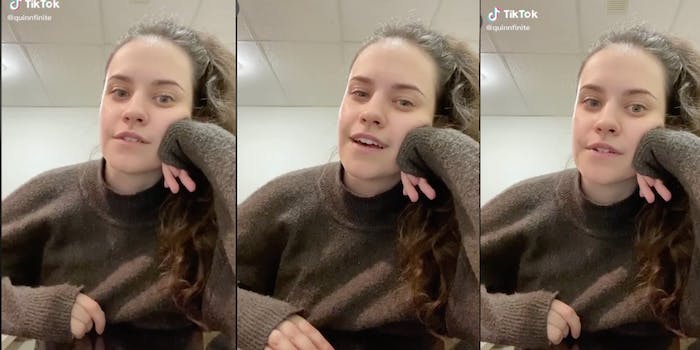 Quinn Finite says she hit the 'jackpot' of promotion.

After an Army base’s Twitter account commented explicit messages on her OnlyFans photographs, a sex worker gained thousands of followers and was outed to her parents, Business Insider reports.

The sex worker, whose stage name is Quinn Finite, posted a naked photo on Twitter that drew attention after the official Twitter account for Fort Bragg, the home of the U.S. Army’s Airborne and Special Operations Command, tweeted sexually explicit replies.

Fort Bragg identified the administrator behind the tweets and issued an apology, per Business Insider. The North Carolina Army base also deleted its Twitter account.

“As many of you may know, there were a string of explicit Tweets from our account this afternoon,” a representative said, per Business Insider. “We apologize to our followers.”

The administrator’s comments drew eyes and jokes, and Quinn gained thousands of OnlyFans subscribers as a result. Before the incident, Quinn made $7,000 per month, she told Business Insider, but now she has over 4,000 subscribers and makes $35,000 per month.

“They kind of keep coming,” Quinn said. “I thought it was over, but there’s still waves. It’s so interesting to see how the internet works that way. You can’t even pay for this kind of promotion. This is the jackpot.”

Quinn, who did not immediately respond to the Daily Dot’s request for comment, said her mother said that she hopes her father does not see the article because she is wearing his shirt in the photograph. In another tweet, she said she and her father can “bond over business chat.”

In response to a tweet asking Quinn if she is OK, she said she is “honestly relieved that this article is doing the ‘coming out’ work for me.”