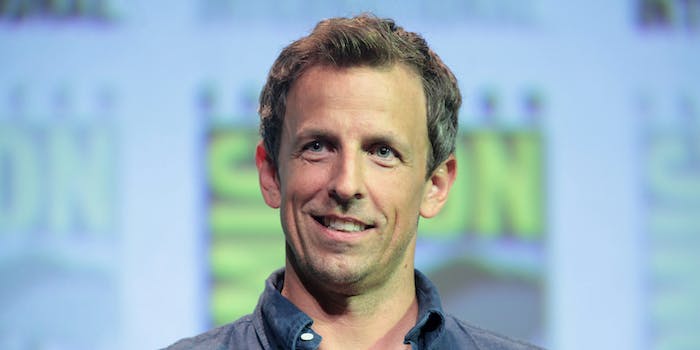 What about, you know, choosing a woman to host?

Last week, the Golden Globes announced Seth Meyers will host the 75th awards ceremony in 2018. According to Forbes, this choice is remarkable for the simple reason that, of all the people in Hollywood, including the tens of thousands of women, Meyers is the best feminist choice.

“When taking into account the onslaught of sexual harassment charges reported from Hollywood, Meyers, who has repeatedly proven himself to be a feminist ally, is the perfect person to stand behind the mic,” Forbes contributor Carey Purcell wrote in an op-ed published Monday.

Kudos to Forbes for recognizing that whoever hosts a major awards ceremony should, you know, respect women. But really? The best “feminist” host is a dude? Was every woman-identifying comedian already booked for the evening?

Purcell even argues that Meyers’ show provides a platform for women “un-seen on many other late-night shows” because his writing team of includes three women out of 12.

The op-ed gets even better in tweet form. Forbes’ showbiz account tweeted Meyers was the “right man for the job.”

The Golden Globes need a feminist host this year, and Seth Meyers is the right man for the job https://t.co/DR71adAlMj pic.twitter.com/wYcVJMAKQj

This whole situation feels oddly reminiscent of the Parks and Recreation episode when Ron Swanson gets awarded the Female Empowerment Award over Leslie Knope. Surely, comedians such as Samantha Bee, Leslie Jones, Ellen DeGeneres, Issa Rae, Melissa McCarthy, and Sarah Silverman (the list goes on and on) can relate to Knope today.

People on Twitter didn’t miss the humor in the Forbes article, either. Many suggested more appropriate hosts and compared the op-ed to an Onion article.

Samantha Bee or a BUTTLOAD of other AMAZING WOMEN would've been a good choice too.

tHe gOLdEn GLoBeS NeEd a fEmiNist hOst tHiS YeAr, aNd sEtH mEyErs iS tHe riGHt MaN fOr tHe jOb pic.twitter.com/l0KdiXthPC

Or you could have a woman do it?

is literally every woman booked that night?

Lol, no. How’s about Tracee Ellis Ross? Or Kristen Wiig? Or Leslie Jones? Or any woman comedienne who is a feminist?

Sure, the Golden Globes needs a feminist host this year. It needs one every year. But what the awards ceremony really needs following a year where powerful men in Hollywood—like Louis C.K. and Harvey Weinstein—have taken advantage of and disenfranchised women in the industry, is to amplify the female voices that have been historically stifled.