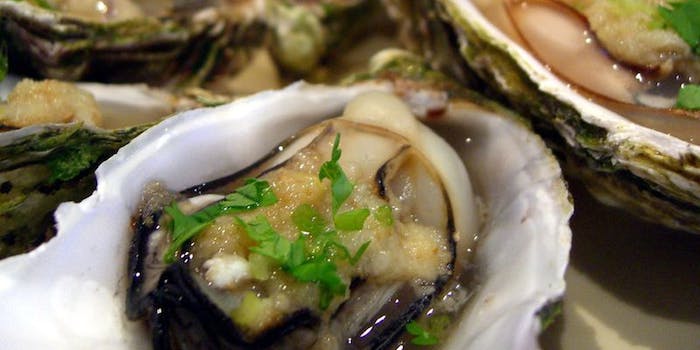 Can these 5 foods actually improve your sex life?

It's time to put these myths about chocolate, oysters, and even grilled cheese sandwiches to bed.

It’s a question that’s plagued humankind for centuries: Do you prefer eating or having sex? As it turns out, it’s a pretty close call: Food and sex rank interchangeably on the grand pyramid of intrinsic human needs and desires, to the point where studies have shown that men think about food about as often as they think about going to the bone zone.

Considering how obsessed we are with both eating and boning, we often can’t help but try to combine these two great passions together. That’s led to the creation of various urban legends and old wives’ tales about certain foods making you better or worse at sex, from the one about oysters being aphrodisiacs to a recent “study” (which was actually a branded survey) linking eating grilled cheese to having more sexual partners.

From super-foods guaranteed to amp up our sex drives to snacks that make our, ahem, bodily fluids taste better, it’s time to take a critical look at some of these tall and not-so-tall tales about food and sex.

It’s an oft-repeated tip that the best way to get a woman’s loins pumping is to gift her with bonbons. Many claim that chocolate’s libidinous qualities are caused by the sugar rush, or the blend of chemicals that are strikingly similar to estrogen that promote good blood circulation. Either way, the idea that chocolate makes you want to get busy continues to circulate in women’s magazines and Yahoo Answers forums to this day. 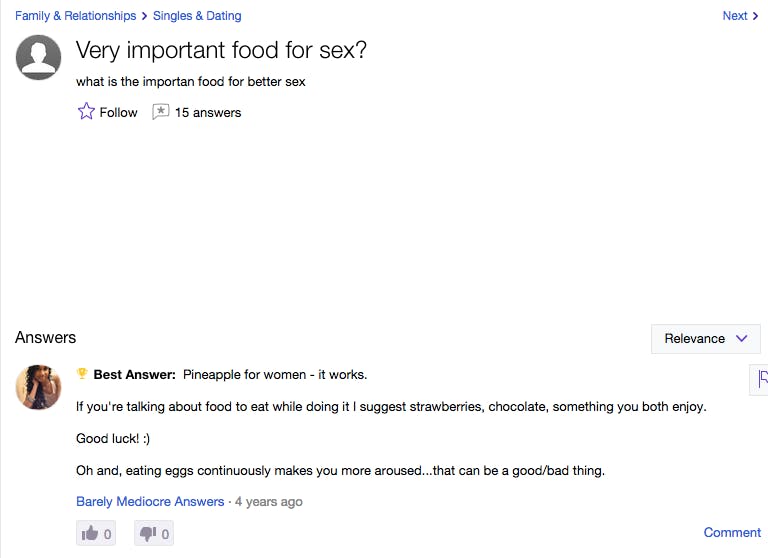 Alas, there’s no strong evidence that chocolate possesses any true mojo-enhancing qualities. The scant proof that most sex tip-sheets cite is likely tied to a 2006 Italian survey that found that female chocolate eaters scored higher on the Female Sexual Function Index (FSFI) than non-choco lovers, specifically when it came to sexual desire.

The problem, as the researchers themselves note, is that this correlation disappears the minute you take age into account. Chocolate lovers are on average much younger than those who don’t like eating chocolate. So once the study controlled for age, researchers concluded that “FSFI scores are similar, regardless of chocolate consumption.” Translation: That bag of frozen Almond Joy bites might be delicious, but it probably won’t do anything for your libido.

Myth #2: A cup of joe can cause your toes to curl.

According to Wikihow, coffee’s right up there with chocolate when it comes to jolting your sex drive. Yet there’s an equally pervasive belief that caffeine will sap libido by increasing our underlying anxiety and making it difficult to concentrate. So which is it?

Probably neither. While there haven’t been any human studies explicitly looking at the link between sex and caffeine, one recent study examined if caffeinated coffee influenced the sex hormone levels of men and women over an eight-week period. After measuring subjects’ testosterone and estrogen levels, the researchers found no substantial differences between those given regular or decaf.

So feel free to indulge or neglect your coffee fix. But don’t count on your six-cup-a-day habit helping you get lucky tonight.

Myth #3: Eating oysters will get you and your lover in the mood.

In 2005, a group of researchers presented a lecture to the American Chemical Society in which they claimed that when they injected rats with D-aspartic acid and N-methyl-D-aspartate, two non-essential amino acids, the rats’ testosterone and estrogen levels went up. The researchers claimed they had found these same two amino acids in several species of mollusks, including the oyster, which is widely known for its love-boosting powers.

At the time, the media reported on the study as irrefutable proof that oysters were an aphrodisiac. Except the researchers never actually looked at oysters specifically; instead, they looked at mussels and clams. The study was also never published in a scientific journal, which is the academic equivalent of swearing to your friends that you totally did see a UFO while you were stoned the night before.

Although there has been some early research showing D-aspartic acid can boost testosterone levels in people, there’s been zilch showing that eating foods rich in it will do anything for you. But even if the researchers had published their study, it would take several Bigfoot-size leaps before we could reasonably believe that oysters are good for more than one kind of shucking.

Myth #4: A natural aphrodisiac in your sports drink will get your blood pumping.

For as long as we’ve been shagging, we’ve been trying to enhance or jumpstart our sexual prowess by taking natural herbs. Today we have a litany of supplements, energy drinks and (discontinued) shakes touting aphrodisiac properties, which you can find over the counter at pretty much any large-sized pharmacy or bodega.

Despite the staggering number of natural aphrodisiacs out there, there’s little proof that any of them are worth the sticker price. Not all hope is lost though. In a 2011 review by researchers from the University of Guelph, they concluded that ginseng, saffron, and yohimbine, a natural chemical from yohimbe trees in West Africa, could possibly have some boosting function. Ever the mood killers, however, they cautioned that there’s not enough evidence to start seriously recommending these herbal remedies to hopeful Lotharios.

Like all great fables, this particular yarn is often repeated, but only rarely tested out. Still, there’s a whiff of logic to it. The contents of our bodily fluids, be it sweat, urine or semen, actually are influenced by the nutrients we process and the waste products we don’t. That’s why one of the tell-tale signs of diabetes is an unusually sweet urine odor; the glucose that would normally be converted into energy by insulin is instead left behind to flow right back out into the nearest toilet bowl.

More recently last year, sex writer Rachel Khana embarked on her own personal experiment, taste-testing various foods and asking her boyfriend to do so as well. The verdict: Pineapple juice definitely made her partner taste sweeter, while celery and meat changed absolutely nothing. While that might seem like a victory for Big Pineapple, sadly for the ladies, her boyfriend reported no changes for any of the foods.