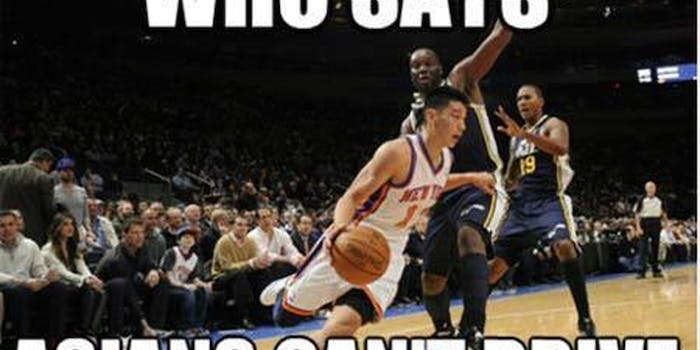 The sudden rise of New York Knicks guard Jeremy Lin has brought out troubling stereotypes about Asians across traditional and social media.

Shades of Rush Limbaugh vs. Donovan McNabb cloud boxer Floyd Mayweather’s recent comments on Twitter concerning the play of New York Knicks point guard Jeremy Lin. He boldly stated, “all the hype is because he’s Asian. Black players do what he does every night and don’t get the same praise.”

The problem is that when it comes to the topic of Lin, Mayweather’s not alone.

For those unfamiliar, a brief background of the Limbaugh affair: On Sept. 28, 2003, Limbaugh, then one of the most popular conservative radio personalities in the country, took to ESPN’s Sunday NFL Countdown and admitted that he thought the ex-Philadelphia Eagles quarterback was the recipient of public adoration because “the media has been very desirous that a black quarterback do well.” (Former Washington Redskin Doug Williams is the only black quarterback to ever win a Super Bowl.)

It was enough to set off ESPN panelist Tom Jackson, who reminded Limbaugh: “Somebody went to those championship games. Somebody made these plays that I saw running down the field, doing it with his legs, doing it with his arm.” In a nutshell, look at the stat sheet, not the skin tone.

Nine years later, America again finds itself questioning how to handle the talent emanating from a sport’s minority. As evidenced by the 71,000 tweets in the last 24 hours alone about Jeremy Lin, the public simply does not know what to make of the recent on-court success by the Knicks point guard—the NBA’s first Taiwanese-American player.

What’s worse is that the conversation—and all the ugly, unnecessary Asian stereotypes that come with it—is being led by some of the country’s most recognizable figures.

It’s almost as if Lin has come to embody Troubled Rebellious Asian, the latest in a laundry list of memes based on Asian stereotypes.  .

“Jeremy Lin makes me wanna b azn,” posted über-producer Diplo this morning in a tweet that received 210 retweets and played off a term that urbandictionary.com defines as “a retarded form of ‘asian.'”

Fox Sports columnist Jason Whitlock tweeted on Feb. 11, after another stellar performance by Lin, “Some lucky lady in NYC is gonna feel a couple inches of pain tonight,” a post that drew ire from the Asian American Journalists Association and resulted in a public apology.

New York Times best-selling author Jason Mattera tweeted yesterday that he likes “that Jeremy Lin doesn’t look as though he came from a gang initiation”, a nod to both the NBA’s tattoo-friendly image and the age-old stereotype that Asian-Americans have a more formal, G-rated presence in the public eye.

Philadelphia 76ers guard Andre Iguodala had a similar typecast for Lin, according to a tweet from Fox Sports pundit Ben Maller, saying “It’s kind of like seeing a black hockey player doing well.”

On Conan Wednesday night, and via a tweet sent out by @TeamCoco this morning, show writer Deon Cole pleaded with Lin to “please let black people keep basketball. It’s only fair.”

But is it fair? Professional basketball may be dominated by blacks (20 of the 24 2012 All-Stars are black, and only two-non blacks—former Boston Celtic Larry Bird and longtime Los Angeles Laker Jerry West—are ever seriously mentioned in conversations about the sport’s historically elite), but it’s hardly a segregated game.

Maybe the true perception we should hold of Jeremy Lin is best explained by film director and noted Knicks fan Spike Lee, who has spent much of the past three days refuting Mayweather’s claim that Lin only gets attention because of the color of his skin.

“Floyd Mayweather I hope you Watched Jeremy Hit The Gamewinning 3 Pointer With .005 Seconds Left,” he posted at 9:42pm EST on February 14 in a tweet that received 5,431 retweets. “Our Guy Can BALL PLAIN AND SIMPLE.RECOGNIZE.”