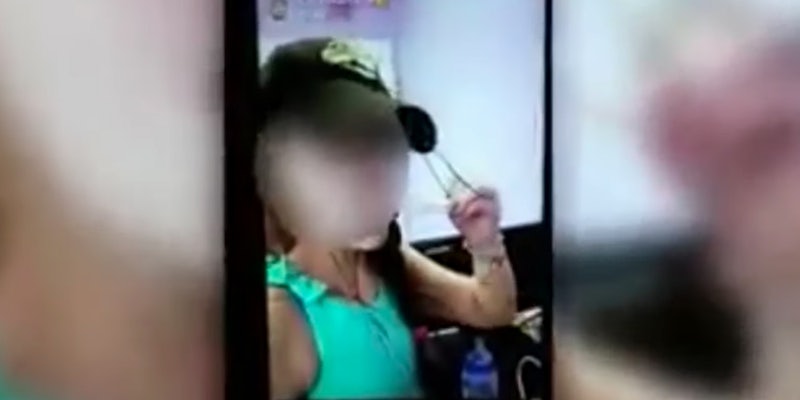 She is facing up to 30 years in prison.

A Florida woman was hit with a felony charge after posting a video of her daughter licking a tongue depressor at a doctor’s office and then putting it back in a jar with clean ones.

The video was recorded at the All About The Kids and Families Medical Center by 30-year-old Corey Ward, who uploaded it to her Snapchat along with the caption, “Don’t tell me how to live my life.” It shows Ward’s daughter proudly tapping the jar after returning the contaminated depressor.

After online backlash, the mother went on Facebook to imply the tampered medical equipment was thrown out after recording the video. Ward also wanted to clarify that her daughter’s actions had nothing to do with recently popularized social media challenges like the #IceCreamChallenge, where people go into grocery stores, open ice cream containers, lick the tops, and then put the contaminated tubs back in the freezer.

“The video doesn’t show that the items were thrown away or anything else that happened. I posted this on my personal Snapchat with my 20-something friends, where someone allowed another person to video it. I didn’t post it on Facebook or YouTube as a challenge or whatever,” Ward said.
She also claims she has been receiving death threats ever since uploading the video.

Cori Ward says she's the one who shared the video of her daughter on her personal Snapchat with a few of her friends. The video has gone viral on Facebook where it was posted by someone else. @ActionNewsJax @WOKVNews pic.twitter.com/42Kjm6U03N

According to jail records, Ward was booked into the Duval County jail on July 11 and is facing a felony charge for tampering with a consumer product, without regard for possible death or bodily injury. She is facing up to 30 years in prison and a $10,000 fine if convicted.