On Friday, Katie Brown of South Daytona, Florida, posted a photo of her chocolate Labrador retriever to Facebook—which wouldn’t have been notable but for the fact that she had apparently duct-taped its mouth shut.

“This is what happens when you dont shut up!!!” she wrote in a caption. 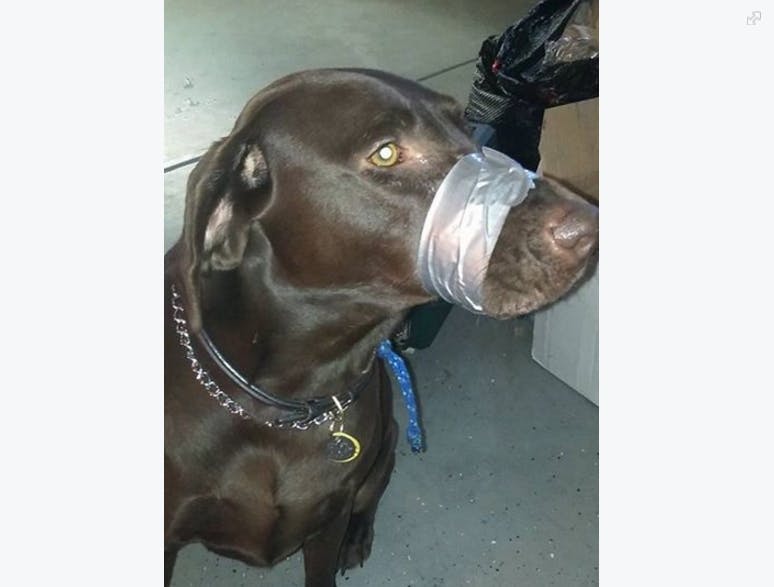 In no time at all, the shocking image had gone nuclear—as instances of cruelty toward animals often do online—and as of Saturday afternoon the post was closing in on 200,000 shares. Brown’s own friends appeared to rebuke her for evident abuse, but she neither deleted the photo nor admitted doing anything wrong. “I cant lie i did it for sixty seconds. It was time out and no more barking,” she wrote at one point, later taunting her critics with comments like “You low class.. Me high class” and “This is why i say you have something to say do it direct.”

A separate post was more defensive: “Dont panic everyone it was only for a minute but hasnt barked since… POINT MADE!!!” Brown wrote. Her most recent post sounded more threatening: “I dont know what asshole did thr bullshit of posting my truck on line…. When i figure it out you are done!!!!” it declared. (Brown’s Facebook profile is completely public.)

The South Daytona Police Department told the Daily Mail that they had received calls about Brown’s post from all over the United States and, indeed, from around the globe. They have so far been unable to locate her for questioning “at the addresses they have listed for her.”

It seems Brown isn’t always so brutal with her pets, however. 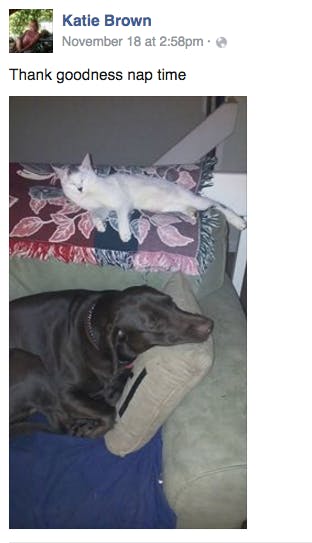 What could have set her off? Was this the first time she did something so extreme to her dog? For now, we just don’t know. Meanwhile, the Internet’s fury burns on.

Update 9:00pm CT, Nov. 28: Adding grist to the outrage mill is the fact that Facebook has seemingly dismissed complaints about the image. Here’s a screenshot of their auto-response to those who flagged the photo for deletion, courtesy of a reader: 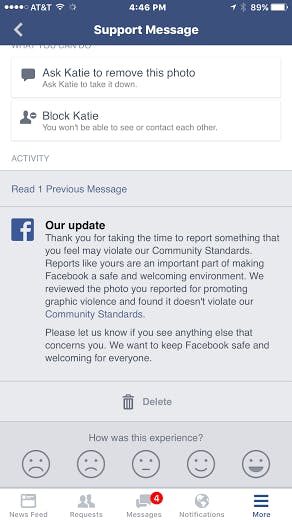 Update 9:38am CT, Nov. 29: Another reader points out that Brown had previously shared a duct tape meme that seemed to predict her later actions: 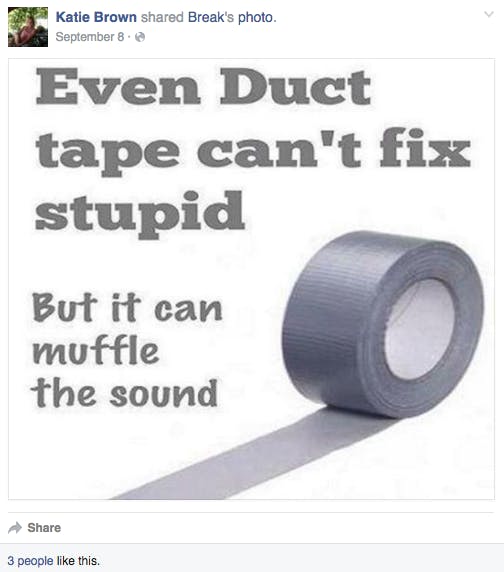 Update 7:49am CT, Dec. 1: Katharine F. Lemansky, 45, was charged on Monday in Cary, North Carolina with the class 1 misdemeanor of animal cruelty. Lemansky, who posted under the Facebook page “Katie Brown,” was staying in Cary when the incident took place.

In a press release, police said they did not remove any dogs from Lemansky because an “animal control officer found the dogs to be very well cared for. It continued:

“The dogs are current on their shots, spayed, and microchipped. They are clean and well-nourished and appear to be comfortable in their surroundings. And there were no signs of injury to Brown’s muzzle, not even detectable hair loss.”