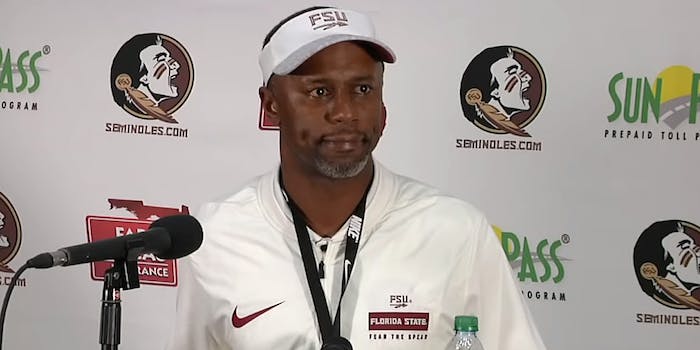 The image read, ‘Believe in something. Even if it means sacrificing your rep.'

Florida State ended a disappointing season this weekend with another loss. The Seminoles finished 5-7, their first losing record since 1976, and the first time they’re missing a bowl game since 1981.

Many fans of the team were miffed and took to social media to express their frustrations.

According to 247 sports, FSU has over 30 players with recruiting grades above a 90 and 19 with grades above 95.
What recruits does Taggart need to bring in to be successful? These are players any program would bring in. The excuses need to stop. #FSU #Willietaggart #fsufootball

While most people were reasonable in expressing their disappointment, one fan of the team posted a meme that shocked and disgusted the community. The image showed a man being lynched, with FSU’s coach Willie Taggart’s face pasted over his face. The text on the image read “Believe in something. Even if it means sacrificing your rep.”

Taggart is the first Black coach in FSU football history.

The image was reportedly shared in a Facebook group for Florida State University fans, where it received a very negative reaction. One commenter responded, “You serious? Wtf is wrong with you?” The original poster replied, “I’m dead fucking serious. This is how far I’m willing to go to get rid of this clown!!!”

People have been sharing screen caps of the conversation in the Facebook group, which identify the poster as Tom Shand. Internet sleuths quickly did some digging and began sharing what they believe to be his LinkedIn profile, as well as tagging his employer in demands that he be fired.

If Thomas Shand is a Booster, I hope @SeminoleBooster will disallow any other contribution from him or affiliation with him. I also believe @FSUTickets should ban him from purchasing tickets of any kind.

I’m not a “jump on the villanizing bandwagon” person, but this is horrible

FSU President John Thrasher put out a statement on Twitter regarding the image on Sunday, saying “A recent racist social media post aimed at our football coach is ignorant and despicable. I speak for the entire FSU community in expressing our disgust and extreme disappointment, and I am glad the state attorney is investigating.”