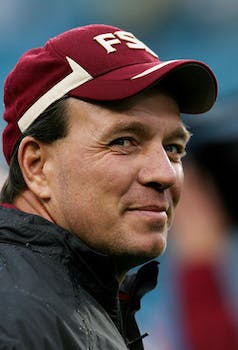 The team's coach has kicked them off Twitter indefinitely after one player's controversial tweets.

If your Twitter stream is dedicated solely to tracking Florida State University’s football team, you might want to follow some new people, as it’s going to be very silent for a while.

Coach Jimbo Fisher banned his players from using Twitter “indefinitely” on Tuesday. While Fisher did not offer a specific reason for the ban, the announcement comes a week after an FSU player made controversial comments on Twitter.

Fisher told Warchant.com, a sports site dedicated to FSU athletics, that Twitter is a “privilege” and that players represent the school when they use it.

FSU defensive back Tyler Hunter was clearly not representing the school very well when he tweeted about killing police officers following an altercation earlier this month. His Twitter account has since been deleted.

“[Players] have to be very smart, they have to learn,” said Fisher to Warchant.com. “They just don’t understand the ramifications of things. They don’t realize how global those things are.”

The team was previously banned from Twitter last October following a loss to Wake Forest. Their Twitter privileges were reinstated a few weeks later.

An athletic team being banned from Twitter is not unusual: Spanish soccer players didn’t tweet during the Euro 2012 championship. Spain ended up winning it all, so maybe a Twitter-cleanse for FSU could do them some good.