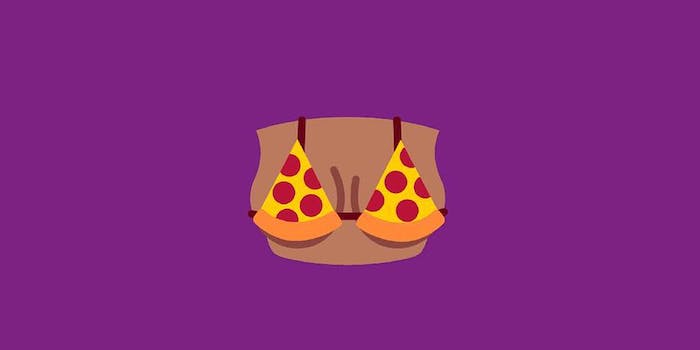 We spoke with a Flirtmoji artist about sex-themed emojis

Flirtmoji aren't just for sexting. They're symbols of how we live now.

If you’ve been around the Internet long enough, you’ve probably seen them: cute, brightly-colored emojis that illustrate those NSFW moments of human existence. Perhaps you’ve seen the penises, which come in a vast array of shapes and sizes? Same, too, for the vaginas?

They’re called Flirtmoji and the company has been creating sex-themed emoji since 2014—everything from boobs to butts to boners, as well as visual puns like two scissors “scissoring.” They’re a natural combination of our increasing reliance on emoji for communication and our desire to sext—or at least talk about sex. And in a world where the eggplant emoji has become our de facto symbol for texting about the male anatomy, it’s a lot more fun.

The artists of Flirtmoji see what they do as going deeper than creating cheeky iconography. “We believe in the immense capacity of symbols to communicate complex (and sometimes intimidating) desires, concerns, and flirtations,” reads their mission statement. According to them, they’re trying to create a language. 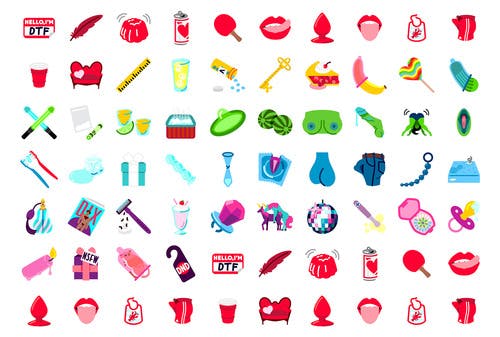 “Sex is in everything, it’s super present, but blending explicit sex and communication in high art is challenging,” said Katy McCarthy, an artist and founding partner of Flirtmoji. She is a sculptor, but was drawn to the idea of taking sex seriously in art while keeping it fun. “It’s impossible to catalog the gamut of sexuality, but it’s trying to illustrate it and bring everything to the fore,” she said.

It’s been easy for Flirtmoji to find press because—surprise!—little icons of vulvas get pageviews. It’s been more difficult to fully integrate themselves into our texting experiences, as they explain on their website:

We’d love to build an app with all the Flirtmoji, but the Google Play Store and Apple App Store don’t allow (see: censor) all sexually explicit content.

They will be launching a free Flirtmoji keyboard in the App Store later this year with only certain Flirtmojis. To use the full array of Flirtmoji right now, however, one has to copy paste the images from their website. 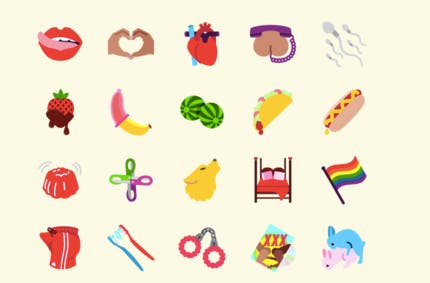 Users can sign up, receive 20 additional Flirtmoji free, and then purchase themed packs of Flirtmoji like “Safe Sext,” “BDSMs,” and the Halloween-themed “Black Magic,” which includes things like a black cat wearing a strap-on and a double-wide coffin.

A cat I'd love to cross paths with #cursemeplease #BlackMagic

The process of creating a Flirtmoji is far more than just drawing some boobs. McCarthy works with designer Jeremy Yingling to bring these images to life. He studied to be a newspaper designer, but as #printisdead, he moved into freelance design. It has turned out to be much stranger than he could have imagined. “This work gave me a good head start on the skills I’d need for drawing butts and boobs,” Yingling said in an email to the Daily Dot, “but Flirtmoji also presented a variety of challenges that I don’t think there was a textbook for. Drawing pubes at 1 pixel width. Inventing a spectrum of colors that can be adapted for all human skins, hairs, fleshes, orifices.”

McCarthy and Yingling work off inspiration boards (which got Flirtmoji into trouble recently when they were found to have plagiarized some vulva designs from artist Erin Tobey), as well as real models. Yingling also likes to play with mood and keep things light. One of his favorite Flirtmojis, below, is what can best be described as “dicksghetti”:

Are Flirtmoji silly? Of course. Yet we are only as good as the language available to us. Language is a tool for revealing our true feelings and desires, and if we don’t have the words—or symbols—to express them, they stay hidden. This may all sound a little lofty for something that allows people to text cartoons of strap-ons to each other. But remember, they also allow for a wider range of communication when propositioning someone for sex, showing kink or gay pride, or announcing that you’re off to the sperm bank to bring new life into the world.

McCarthy believes one of Flirtmoji’s biggest goals is to take everything “from niche fetishes to more standard sexual experiences, and place them all together on an equal playing field.” To put a strap-on next to a penis, or to incorporate different skin tones, or different sizes and shapes of genitalia, is more radical than it may seem. In Flirtmoji, they are all equal options.