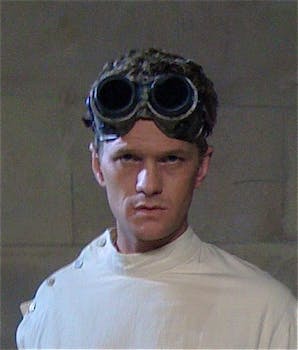 Yes, the man who puts the "dad" in @shitmydadsays is one of them.

With Father’s Day almost upon us (in North America, at least), there are a number of ways to celebrate family patriarchs. The Web offers many ways to do so, including a Tumblr blog chronicling dads on vacation.

Though there are many great dads that deserve to be appreciated this Sunday, it’s impossible to highlight them all. Here’s a list of five fathers on Twitter worthy of your attention.

In the news today is David Payne. The Argyll, Scotland, resident undertook a writing project with his daughter Martha. Seeking for something to write every day, the nine-year-old opted to chronicle her school lunches on her blog, NeverSeconds.

Shortly after she started posting about the awful lunches, her school offered more healthy options for the kids. Thanks to her dad’s encouragement, not only has Martha changed school meals for the better, she’s raised tens of thousands of pounds to help feed students in Third World countries. Terrific work, dad.

Rather than just shell out for bibs for his newborn kids, a gent by the name of Mike decided to make them instead. Fast forward a few years, and Mike now has a blog dedicated to the art of crafting and making stuff.

Though Mike says it can be difficult to pull himself away from his crafting to spend time with his family, it’d be pretty cool to have an old man capable of making his own soap.

Sean Platt is an author and marketer. First and foremost though, he’s the dad behind Children Write The Future, a project to help kids learn to write well. It’s clear he really cares about his kids and family and wants the best lives possible for them.

He’s an active tweeter as well, sharing insights into writing, inspirational quotes, and notes for his children.

Whether he’s fighting off ninjas while wearing a toga or sharing photos of the most delectable bites at the restaurants he frequents, there are few more awesome people on the planet than Neil Patrick Harris.

The actor, singer, and magician has infant twins with his partner David Burtka. When he’s away filming though, he misses them dearly, and isn’t afraid to share his feelings for his family on Twitter.

Sam Halpern doesn’t actually tweet himself. Instead, his son Justin shares many of the instantly quotable jibes that come forth from his seventy-something brain. The endlessly retweetable missives have brought in millions of followers, a book deal, and even a TV show.

While the Halperns are perhaps a little more caustic than the rest of those on our list, Sam’s definitely worthy of inclusion as perhaps the most famous dad on Twitter.