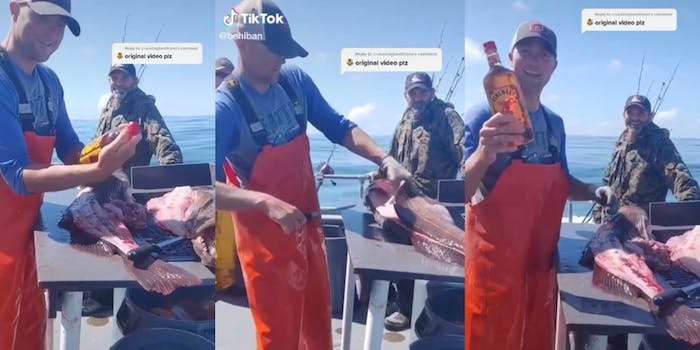 Many are skeptical of the alleged discovery.

A fisherman was filmed “finding” a brand-new bottle of Fireball Whiskey inside a fish, sparking a debate on whether the video is staged and a conversation surrounding marine pollution.

In the video, the fishman can be seen filleting a large fish while on a boat with several others. When he goes to clean out the fish, he discovers a brand-new bottle of Fireball Whisky. He happily holds the bottle up to the camera and shouts, “Jackpot!”

His fellow fishermen cheer and laugh in response.

The video has been viewed nearly 6 million times since being posted to TikTok by user @behiban on Saturday.

“Yeah, they stuffed it in before,” one assumed.

However, some took the opportunity to comment on marine pollution, because, regardless of whether the video is staged or not, it is not uncommon for man-made waste to wind up in sea creatures’ bodies. So much plastic waste reportedly gets dumped into the ocean each year that, at this rate, there will be more plastic than fish in the oceans by 2050. More than half of all fish species have reportedly ingested plastic so far.

“That’s just sad,” one said after watching the video.

Update 1:33pm CT, June 24: When reached for comment by the Daily Dot, @behiban refused to confirm whether or not the video was staged.