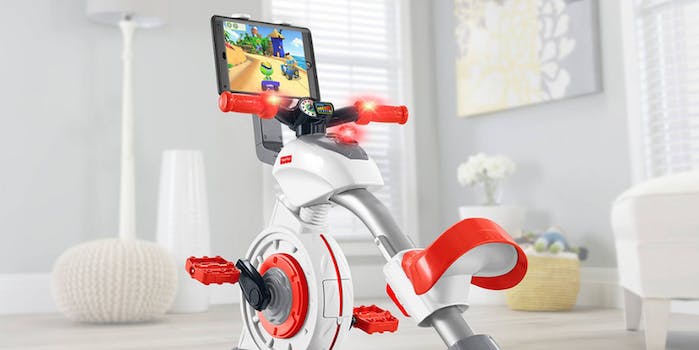 The debate rages on.

Is this tiny exercise bike a body-shaming torture device for lazy parents or this year’s must-have energy burner for cooped-up toddlers? As of Wednesday afternoon, the internet debate rages on.

Fisher-Price recently announced the relaunch its Smart Cycle brand of video-game infused stationary bikes, an idea that combines education software with physical activity. The Think and Learn Smart Cycle is a stationary bike that includes a tablet holder. Kids play games on the tablet by pedaling forwards, backward, fast, or slow and interacting with the touch screen.

In an age when kids are glued to screens at younger and younger ages, this $150 exercise bike/game controller seems like a great idea, even aimed at 3- to 6-year-olds. Kids are already using tablets to play educational software; this just encourages to move their legs at the same time they do it.

The Bluetooth-enabled device can be beamed to an Apple TV or Android TV if you don’t have a tablet or want a bigger picture. Parents can monitor what lessons and games their kids are playing via an app dashboard to track their child’s progress.

While parents dealing with cabin-feverish kids can certainly understand the appeal, not everyone is on board. Some even took to Twitter to voice their concerns to Fisher-Price after the story started circulating.

Look, it's a game to help body shame her!

or you know….just turn off the TV and give them a bike lol

what happened to running in the backyard

Of course, not everyone has a yard or a safe street to ride a bike to a nearby public park. If you’re going to use educational software anyway, why not make tablet time physical activity time too? If you’re ever wondering “does the world seem unnecessarily negative at all times?” Just remember, even Fisher-Price got yelled at for trying to make a video game that would get kids moving.