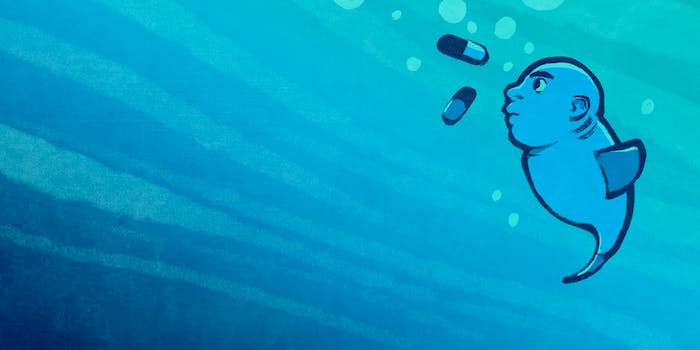 People are buying fish antibiotics on Amazon for human problems

Which is probably not a good idea.

Getting sick always sucks. And the American health care system doesn’t make it any easier or less inconvenient. Perhaps that’s why people are turning to sites like Amazon to order their antibiotics.

There’s just one problem: The antibiotics are made for fish.

A bottle of Amoxfin on Amazon claims to be an “effective treatment for a variety of bacterial infections,” while clearly stating that it is “for aquarium and ornamental fish only.” However, that’s not stopping intrepid Amazon reviewers who say the medication worked great for clearing up their—I mean, their fish’s—strep throat.

Or their fish’s bronchitis.

Or their fish’s ear infections.

Or even their fish’s tooth problems.

Just as long as you remember the right dosage for your 160-pound fish.

Taking antibiotics that weren’t prescribed for you is probably a bad idea. According to Maryn McKenna, author of Superbug: The Fatal Menace of MRSA, there are a lot of reasons why one shouldn’t do this. First of all, since these customers are self-diagnosing, they may not even need antibiotics and aren’t necessarily addressing or remedying their illnesses.

Secondly, taking antibiotics you order from Amazon instead of going to a doctor could contribute to the global antibiotic-resistant bacteria epidemic. “The more we use an antibiotic, the faster resistance to it develops, since resistance is the process of bacteria learning to protect themselves against whatever the antibiotic does to kill them,” McKenna said. “So if we don’t closely control access to antibiotics…then resistance will happen faster because there’s more of the drug out there than there would otherwise be.”

It’s not just a problem on Amazon. Last year, McKenna found it was incredibly easy to buy animal antibiotics over the counter without a veterinary order. The FDA has attempted to crack down on this by updating the Veterinary Feed Directive. “Once the changes are fully implemented, it will be illegal to use these medically important antibiotics for production purposes, and animal producers will need to obtain authorization from a licensed veterinarian to use them for prevention, control, or treatment of a specifically identified disease,” says the FDA in a fact sheet.

With the cost of health insurance and prescription medications a burden to many, not to mention the hard-to-find time needed to schedule a doctor’s appointment, ordering pills off Amazon is an enticing, easy fix. But please, if your 160-pound fish has strep throat, take it to the doctor like a responsible human *wink wink*.