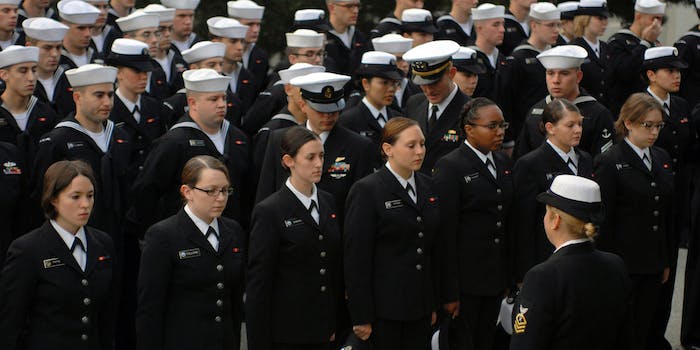 The women will undergo 'the ultimate test of a man's will.'

More than 18 months after women were allowed to begin serving in combat roles in the U.S. military, two women are making history as the first to enlist in the Navy‘s special operations teams, CNN reported.

The two women, whose identities are confidential for their personal security and “career viability,” are training for two different teams—one, a midshipman, is working toward becoming a Navy SEAL, while the other is training for the Special Warfare Combatant-Craft Crewman program (SWCC).

While the women have already broken historic ground, they must undergo months of training and evaluation “designed to weed out the weak,” a special ops website reads. According to Lt. Cmdr. Mark Walton, a spokesman for Naval Special Warfare Command, the SEAL candidate will undergo a three-week evaluation at a SEAL Officer Assessment and Selection process in California.

As part of Basic Underwater Demolition/SEAL training, both the SEAL and SWCC candidates will complete two months of intense physical training, followed by various stages of physical and mental challenges.

Should the candidates pass a physical screening after the first stage, they’ll go through basic conditioning, combat diving, and land warfare training in the following stages. One of the conditioning weeks is known as Hell Week, boasted by the SEAL website as “the ultimate test of a man’s will.”

According to the numbers, the training is as rigorous as it sounds—73 percent of SEAL and 63 percent of SWCC candidates don’t make it. However, should these two women find themselves among an upcoming graduating class of special ops forces, perhaps it’s time we give the SEAL website a gender-neutral revision.