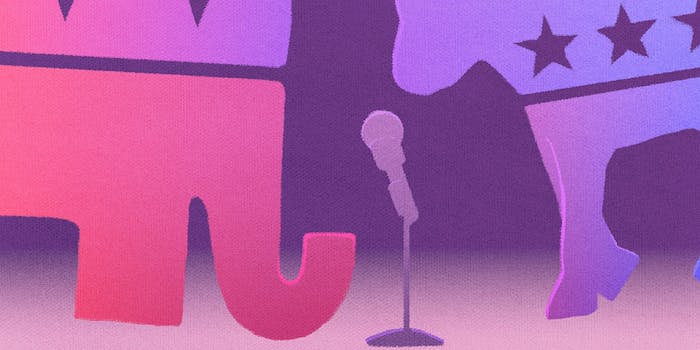 A cynic’s guide to the first 2016 Democratic presidential debate

Let's get ready to cordially disagree with each other!

Here in the land the free and the home of the Whopper, there’s little we love more than angrily yelling at our television sets while picking life’s winners and losers. That’s why we, as a country, love televised presidential debates.

Until this point in the 2016 election cycle, however, only Republican candidates have had the opportunity to stand on stage in front of America, God, and the advertisers of cable news channels to answer important questions about what their super cool Secret Service code names would be.

Now, it’s the Democrats’ turn. Here’s everything you need to know about the first Democratic debate of 2016.

When is the first Democratic debate?

How can I watch the debate?

The debate is co-hosted by CNN and Facebook. You watch it on CNN, CNN Español, CNNGo, or stream it for free at CNN’s website (even if you don’t have cable). You can also watch the debate in virtual reality, if that’s your thing.

Facebook allows you to get in on the action directly. Just submit your questions to this CNN Facebook post and you might get an answer from the Democratic lineup. You can also submit questions in video form via Instagram by adding the hashtag #DemDebate. Or you can just crack jokes about the whole thing on Twitter.

Who is moderating the debate?

Can we expect Cooper to do a good job?

Earlier this month, Cooper aired a hour-long special report entitled #Being13: Inside the Secret World of Teens, which attempted to give the olds an idea of what it’s like to be a seventh grader. While #teens are quickly adapting to the rapid pace of technological advancement, the program’s core message was that middle school has remained unchanged since time immemorial: a toxic hellscape from which no one emerges without deep emotional scars.

The same can be said for national politics. If Cooper can pull trenchant insight from a panel of awkward 13-year olds, he should be able to at least get something good out of Martin O’Malley.

Who is Martin O’Malley?

He’s running for the Democratic presidential nomination and will be participating in the debate. Until this January, he was the governor of Maryland.

Who else is in the debate?

So, no Donald Trump this time?

No, though some would argue that Sanders is a solid alternative.

I keep hearing that Joe Biden might make a surprise cameo at the debate. What’s up with that?

For most of the Obama presidency, there’s been an expectation that Vice President Joe Biden would not pursue another presidential run. While Biden ran for president multiple times before signing on as President Barack Obama’s running mate, it was assumed that the impending Hillary Clinton juggernaut would stop a mainstream candidate like Biden in his tracks.

However, as Clinton’s poll numbers have waned, there’s been chatter about a newfound Joe-mentum building inside the beltway. Much of the conversation about a possible Biden run is couched in his particular life situation. Biden’s son Beau, an Army veteran who served as Delaware’s Attorney General, recently succumbed to terminal cancer. It was reported that Beau’s dying wish was that his father take another shot of the Oval Office because, as Beau reportedly believed and New York Times columnist Maureen Dowd described it, “the White House should not revert to the Clintons and that the country would be better off with Biden values.”

It’s a stirring narrative, to be sure. But, last week, Politico revealed that the rumor about Beau’s deathbed endorsement of his father’s possible campaign was leaked by the vice president himself as a calculating move to test the waters of public sentiment.

Were Biden’s actions significantly more cynical than how other candidates use their families for political gain? Hard to say. But it does make watching this recent ad from a “Draft Biden” group highlighting the tragic death of Biden’s first wife and daughter in an auto accident considerably more uncomfortable.

Is Biden going to participate in the debate?

CNN has indicated that it will let Biden jump in up until the very last minute, but a surprise appearance by the vice president remains entirely unlikely. Then again, stranger things have happened this election cycle.

In case of Biden break out podium number 6. Here it is folks. #DemDebate pic.twitter.com/27B7ij3IEO

Is there anyone else in the Democratic race?

Yes. Notably, Harvard Law professor Lawrence Lessig, who is mounting a campaign for the Democratic nomination that’s unique, to say the least. Responsible for inventing a new paradigm in the world of intellectual property with Creative Commons, Lesssig is now attempting to do something similar with campaign finance.

Lessig is running an extreme version of a single-issue campaign. If elected, he will work with laser focus to pass comprehensive campaign-finance reform in an attempt to get big money out of politics. Once that’s passed, he will promptly resign from office, leaving his vice president in charge.

However, CNN isn’t letting Lessig participate in the debate because he isn’t polling well enough, but Lessig says the problem is that many polls didn’t even include him as an option. Understandably, he’s not particularly thrilled about the whole situation.

I’m just watching to see how Sanders does. What can we expect from the firebrand senator?

The debate is Sanders’ to lose. He’s polling ahead of Clinton in both the early voting states of Iowa and New Hampshire. He has also been raising a ton of cash from small donors. Between July and September, Sanders raised $26 million, almost entirely from small donors. That’s more money that any Republican brought in over that time period and is only $2 million shy of Clinton’s haul.

Sanders explicitly shuns personal attacks against his political opponents, but you can expect him to go hard on the issues of campaign finance and income inequality—two issues at the center of the Sanders campaign.

What other issues will the candidates likely touch on?

Expect climate change, gun control, immigration, foreign policy (with a focus on Iran, Russia, Syria, and China), free trade (with a focus on the Trans-Pacific Partnership trade deal), college-tuition assistance, minority rights, and abortion to all take up considerable bandwidth during the debate.

I’ve heard the Clinton campaign is in trouble. Is her ascendancy to the Oval Office any less assured than it was a year ago?

Does this answer your question?

OK, well, that’s about as good an answer as you’re going to get at this point in the election cycle. We’re more than a year out from election day. Anyone telling you anything with certainty is a huckster undeserving of your trust.