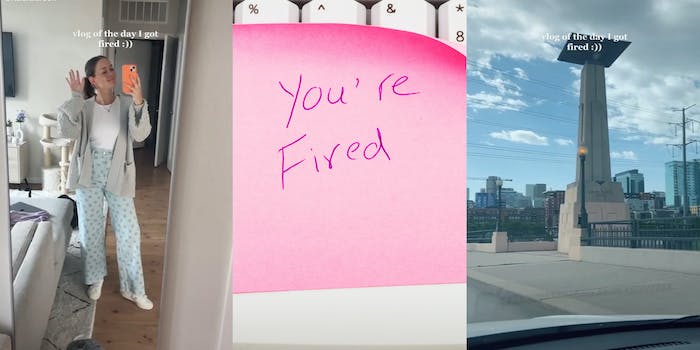 ‘They said my social media posts made them question my judgment’: TikToker says she got fired for sharing her salary online, sparking debate on salary transparency

'I bet another employee complained because they make less [money than her.]'

A woman’s series of videos detailing how she got fired for posting about her salary on TikTok went viral last week.

The latest viral video shows Lexi Larson (@itslexilarson) showing her work outfit while her voiceover says, “Hey guys. My name is Lexi. Welcome to the vlog of the day I got fired. This was my outfit.” The video then shows a short clip of buildings while she drives to work.

“I left for the office at, like, 8am and this all of the footage I got because right when I went inside, I was fired. Thanks for watching,” she finishes.

Larson was flooded with questions in the comments section about the reason behind getting fired. In a previous video, Larson clarified why she was fired from the job she had only been at for two weeks.

Clearing up some questions from my video about getting fired 🤪 pt. 1

“Their issue with my [TikTok] videos was me sharing my salary,” Larson says in a video.

“And just to be super clear, I did not share any company private information. I confirmed with them that I hadn’t broken any policies or shared anything that was a security concern,” she continues.

In addition to disclosing information about her salary, she says the company thought Larson’s videos made them question her judgment as an employee. She says they specifically mentioned her disclosing her salary as being the issue. When her employer first addressed the video concerns with Larson, she says she took the TikToks speaking about her salary down as she did not want them to dislike her. She says they ended up firing her two days later.

Larson claims she didn’t see an issue with sharing how much she earned because she thought her salary was already public knowledge.

“I did not think it would be an issue whatsoever because in Colorado it’s a law that you include the salary range for a job on a job posting. I already assumed it was public knowledge,” she says. As of Jan. 1, 2021, Colorado mandated all employers must include salary ranges in all job postings.

Larson says she cross-checked the company’s vacancy listings and saw no salary was included in them. She claims she chose to be transparent about her salary on the social media platform because TikTokers sharing their salary online ultimately helped her when she first signed up for TikTok.

It all worked out in the end because Larson says her previous employer offered her her job back, claiming she was free to post whatever she wants.

“My old job that I am now going back to never had any issue with my social media posts and when they offered me my job back, they actually specifically told me that I am free to share my salary information however I want,” she says.

In another video, Larson elaborated on why she left her old job for the new one despite not looking for one. She says the company reached out via LinkedIn and Larson took the job on the promise, “we are a great place to work. We support our employees. You’ll love it here.” Two weeks later, Larson says she was fired with no warning and no discussion of what she can and can’t post online. In a video, she says she decided to take the new job, which was in the tech industry, because she would earn $40,000 more.

Ok pt. 2 final video answering questions about me getting fired 🤪 excited to move on and never think about this situation again lol

Several users urged Larson to seek legal counsel or to even sue the company. But Larson says Colorado is an “at-will employment” state, meaning employers can fire you for “whatever reason.”

Many users expressed their support for Larson and thanked her for being open about her salary.

“Salary transparency is super important. Keep your head up. You’re a good person,” one wrote.

“So sorry you had to go through that — totally unfair. but so happy you’re able to go back to your old job — wishing you all the best!” another said.

“SO insane that they fired you over this in 2022 when salary transparency is SO important and raved about. They made a huuuuge mistake!!!” a user said.

“I’m so sorry they made you feel like that. Such a shitty feeling but I’m so happy you got your old job back. Thank you for showing the transparency!” a third commented.