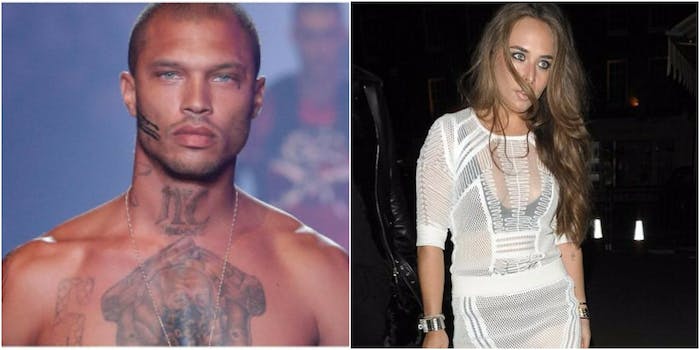 “Fine Felon” aka “Hot Mugshot Guy” aka “Prison Bae” Jeremy Meeks has been living quite the life as a free man.

The 33-year-old whose mugshot captured our lust back in 2014 (and who also served time for gang activity) scored a modeling deal and since his 2016 release has been walking runways, strutting on red carpets, and traveling the world.

Evidence of this kiss, which happened on a yacht in Turkey, is of interest to his fans and followers, not just for gossip’s sake, but also because he’s married.

Green confirmed that she and Meeks are an item on Sunday on her now-deleted Instagram account, writing “Just the beginning… We appreciate all the love and all the hate,” according to Harper’s Bazaar U.K.

Because we’re not the two people in the Meeks’ marriage, we don’t know their situation or arrangement, and therefore, shouldn’t jump to conclusions or judge whatever decisions anyone involved has made.

But, if we were looking for clues as to what that situation might be, we would do as any amateur 21st-century sleuth would do, and dig through the social media accounts of the married couple. Fine Felon’s Instagram seems to be scrubbed of his wife, Melissa Meeks, as the Daily Mail points out. And five days ago, right before the yacht pics surfaced, Melissa used the poetic musings of Tupac, as she often does, to express her feelings.

The next few days included posts of her spending quality time with her kids.

Then, as of Sunday, she posted what the Daily Mail called a “sultry selfie” and perhaps evidence that she isn’t sitting around sulking during her #birthdaymonth.

However this plays out, we hope the best for all—and mostly for Fine Felon to stop doing things that could land him prison.