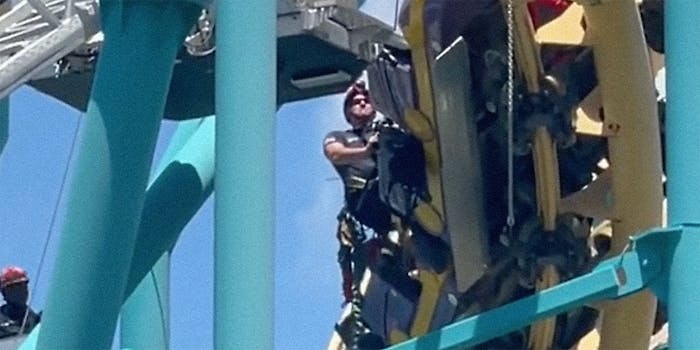 ‘Could you put your phone away for me?’ Worker tries to stop TikToker from recording trapped roller coaster riders at Six Flags

A TikToker filmed the rescue of multiple trapped riders on a suspended roller coaster at the Six Flags Fiesta Texas amusement park in San Antonio on Saturday.

Posted by @hugoharleyz, the now-viral video shows riders on the Poltergeist roller coaster as men in harnesses attempt to save them. According to an NBC News report, the roller coaster “stopped in the middle of a ride” during the afternoon, with people stuck on the ride.

However, an unseen park employee wanted @hugoharleyz to stop filming a video of the rescue, which has over 550,000 views on TikTok.

“Could you put your phone away for me?” he can be heard asking.

@hugoharleyz instantly tells the Fiesta employee “no” and asks, “Is it against the law, or what?”

Another video shows a different view of the rescue, with a fireman escorting a rider safely down a long set of stairs.

“It’s already on the news; that’s how we know about it,” says an unseen woman. “What does it matter now?”

Hilariously, some regular Fiesta riders don’t seem to care about the mishap. In the comments on the video, TikTok user Jo Herdez commented: “[The roller coaster] is closed half the time I go and gives you whiplash the times it is open. Will I keep getting on? Yes!”

There were no injuries reported.

“The safety of our guests is our highest priority,” said Six Flags Fiesta Texas spokesman Jeff Filicko to NBC News, “And the ride will remain closed while we complete a full inspection.”

The Daily Dot has reached out to Six Flags Fiesta Texas.