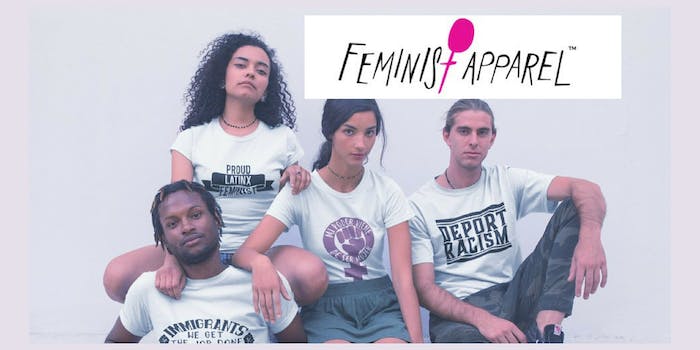 Former employees of clothing brand Feminist Apparel are speaking out after being fired by CEO Alan Martofel one week after they confronted him over his abusive past and asked him to resign.

According to Refinery 29, Martofel fired all nine employees without severance after they became aware of his history of sexually abusing women, including an accusation of rape made over Facebook, and confronted him over the revelation last month.

Martofel admitted the allegation and his previous abusive history, which he had  detailed on Facebook in 2013, and stated his behavior was the reason why he launched the company. The employees then asked him to step down and separate himself from the company, which he accepted at the time. Within the week, however, Martofel stopped answering correspondence from employees and then fired them on July 1.

In addition to the rape accusation, Martofel’s previous Facebook note announcing Feminist Apparel shared that he had been guilty of grinding up on women in enclosed spaces without consent, making out with women unable to consent, and putting “a woman’s hand on my dick which she was sleeping.” He wrote that when he saw street harassment, he didn’t do anything because he didn’t “like confrontation.”

The company’s products were going to “spark conversation and give a voice to those of us who may be too afraid or insecure to speak up. FeministApparel.com will provide resources…that raise awareness about rape culture, how to combat it, and what to do if you find yourself in a situation where you see it unfolding.” It was his “humble attempt” to fix rape culture and society, he wrote.

The former employees have since created a joint-press release on “The Truth Behind Feminist Apparel’s Management,” a blog dedicated to documenting correspondence and statements regarding their firing, complete with Slack screenshots, Facebook posts made by former employees, and an anonymous Glassdoor review that accused Martofel of pocketing the funds set aside from profits during charity fundraisers and devaluing employees.

“This is the patriarchy and toxic masculinity at its fucking finest. I feel righteous and angry. I feel supported by my coworkers and friends. I also feel tired. I feel incredibly sorry knowing that there are survivors in this office who were led to believe that their contributions to this company were directly going to creating a safe space and platform for survivors, feminists, and marginalized identities,” Rebecca Green, Feminist Apparel’s former art director, told Refinery 29.

In a statement addressing “his narrative,” Martofel included his original Facebook post in full, which he stated that he “went out of [his] way” to write in 2013. His statement notes that, in the meeting with the former employees, he was “made aware that they, unequivocally, do not share [his] views on either business or feminism.”

And while he “appreciates” the “perspective” that his history of sexual abuse, coupled with how he financially capitalizes on a movement for women’s equality, “disqualifies” him from having a place in feminism, he “wholeheartedly disagrees.”

A post on the company Facebook page states that it is “currently in the process of seeking new management, including a new CEO,” though it’s unclear where Martofel will go in this restructuring process. “The company is presently weighing options, how long it takes is subjective, so while I wish I had a solid answer with such and such a date, at this time I do not,” Sarah Doheny, who is with a public relations firm working with Martofel, told the Daily Dot when asked if he’d completely remove himself from the company.

At the center of Feminist Apparel and Martofel’s conflict is the idea that anyone should be able to financially capitalize on the feminist movement.  While Martofel and his former employees may have purchased art for their products with feminism in mind, it is Martofel, the CEO, who has likely profited the greatest. A man led this company, called Feminist Apparel, in an effort that, regardless of his intent, lined his pockets. Now that we know this man’s past, that he hasn’t learned from it, and that he uses his power to shut down women who question him, his entrepreneurship is nothing short of malicious. Feminism is about equality for women, full stop, not financially profiting off this notion, not profiting off the women who are invested in this movement and who now feel mislead and used.

“This was a place that claimed to be ethical and feminist. It was so hard to hear that Alan had done those things and hidden them from us, because that meant that we had been working for an abuser who was taking money from abuse victims,” Ryker Fry, Feminist Apparel’s former office and HR manager, told Refinery29.

When feminism is used to support oppressors, we all lose.

Of course, that’s not to say that the employees involved were complicit or have also benefitted in the same manner; there is a power structure to Feminist Apparel—the exact one feminists fight against. The entire effort of these former employees since finding out has focused on righting what they learned to be wrong. Confronting a broken system as a marginalized person can be intimidating, especially considering the retribution someone must take into account, which these employees, of course, have faced.

Martofel’s statement attempts to argue that he was forthcoming in his abusive history, so he should be absolved. But if true, why hadn’t his employees been aware that the company itself was borne out of his abuse? Why had he constantly led with the narrative, as Refinery29 reported, that the company started amid creating a film against sexual assault?

Feminist Apparel was never intended to uplift the voices, experiences, and work of actual women and nonbinary people, like he claims; it was a company for men who weren’t quite sold on the radical idea that women and nonbinary people are people, and deserve to be treated as such. Yes, in a culture that teaches men that they should strive to be emotionless alpha dogs, a space to sort through sexist norms is absolutely necessary. But an absolution for your past sexual assaults fronting as a “feminist” clothing company is not that space.

Regardless of the fate of Feminist Apparel—if the former employees seek legal recourse or if it dies a slow death—Martofel’s ignorance just about seals it. If you’ve run a “feminist” company for half a decade, and still legitimately disagree with the anti-capitalist tenants of feminism and don’t understand why you, someone with a history of sexual abuse against women, is being asked to step aside, then you haven’t learned a fucking thing.

Being a feminist ally is about listening to the women and nonbinary people around you and promoting those ideas with your privilege, not making space for yourself—a man with an abusive past.