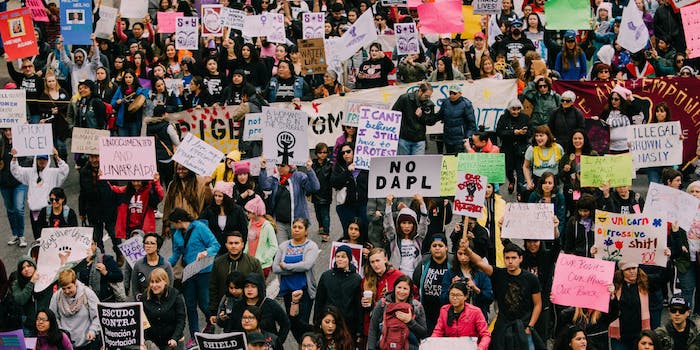 ‘Feminism’ is Merriam-Webster’s word of the year

2017 was an exceptional year for feminism, in the best (and worst) ways.

The past 12 months have been a year ripe for feminism, from the Washington D.C.-based Women’s March replicated around the world, to the international reckoning of decades of sexual harassment and assault committed by industry titans.

So it’s no surprise that the term “feminism” was a top lookup for Merriam-Webster users, making it the dictionary’s Word of the Year for 2017.

In the dictionary’s breakdown of their Words of the Year, Merriam-Webster disclosed it experienced spikes in lookups for “feminism” after the women’s marches; when Kellyanne Conway said she didn’t consider herself a feminist; and in response to the releases of The Handmaid’s Tale and Wonder Woman.

More recently, searches for “feminism” have resulted from the months-long inspection and subsequent fallout of sexual harassment and assault allegations, led by the fall of producer Harvey Weinstein and still playing out through media and tech industries and into politics.

Following feminism, Merriam-Webster chose nine other Words of the Year:

2) “Complicit,” which saw search spikes after Ivanka Trump said she didn’t know the meaning of the word.

3) “Recuse,” with all spikes in the word’s interest related to Attorney General Jeff Sessions, who recused himself from the Russia- and Hillary Clinton-related investigations.

4) “Empathy,” which drew interest when Iranian film director Asghar Farhadi, who directed the Academy Awards’ Best Foreign Language Film The Salesman, refused to travel to the U.S. for the Oscars in response to Trump’s travel ban.

6) “Syzygy,” which spiked on the day of August’s solar eclipse, and as a result of December’s supermoon.

7) “Gyro,” which drew interest after Jimmy Fallon and Luke Bryan sung about how they didn’t know how to pronounce the word—in the sandwich sense, not the technical sense.

8) “Federalism,” for which lookups spiked after Sen. Lindsay Graham argued for the Graham-Cassidy bill to replace the Affordable Care Act.

9) “Hurricane,” a top word looked up in early September after Hurricanes Harvey, Irma, Jose, and Maria flooded areas of Texas through the Caribbean islands.

In a video elaborating on Word of the Year, editor-at-large Peter Sokolowski said “feminism” was first entered into an English dictionary by Noah Webster in 1841 with the definition being, “the qualities of females.”

So, what exactly is feminism these days, anyway? Take it from the dictionary itself:

Today’s definitions of feminism read: “the theory of the political, economic, and social equality of the sexes” and “organized activity on behalf of women’s rights and interests.”