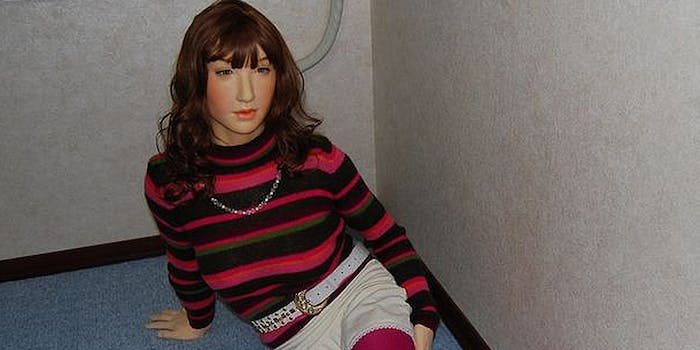 Men dressing up like dolls is about as strange as anything else you'll find online.

To all appearances, 2013 was the year that bronies went mainstream, but casual Internet observers have already moved on to mocking a different toy-based fetish: masking. Judging by a trailer for a documentary program on Britain’s Channel 4, the hobby is entirely harmless, if unusual—a sort of heightened cross-dressing, really. Men who would rather have the appearance of living dolls wear wigs, women’s clothes, and silicone masks of female faces.

Often this practice, indulged during leisure time and for specialized nightclub events, is part of an effort to create a female alter ego, a beautiful fantasy persona. Some men go so far as to temporarily alter their bodies. Below, “Vanessa” receives a saline infusion to swell breast tissue for a few hours, then dabs the needle punctures with super glue.

“Secrets of the Living Dolls” garnered a whopping 13.5 percent audience share in the U.K. last night, or about 2.3 million viewers. Like many such investigative pieces, it walked the line between sensitivity and gawking exploitation, a slippery tone brilliantly satirized by the sketch show That Mitchell & Webb Look.

Predictably, the Web’s reaction was one of horror, mockery, and disbelief.

So, this has been haunting me since I watched #livingdolls last night… pic.twitter.com/olgae5jeJY

They look like Jason from Halloween!! With better Mac foundation 😂😂 #livingdolls

My face has actually been in this position for ten minutes #livingdolls #channel4 pic.twitter.com/XFHc3Tl5iu

Reddit, meanwhile, drew comparisons to American Horror Story and the Wayans brothers’ comedy White Chicks. Some argued that the stigma associated with such behavior would never fade, while others admitted to being confusedly aroused.

There was a ray of empathy here and there, thank god.

Well said, Colin. Here’s to a year in which living dolls get at least as much love as the guy who dresses like a mermaid.