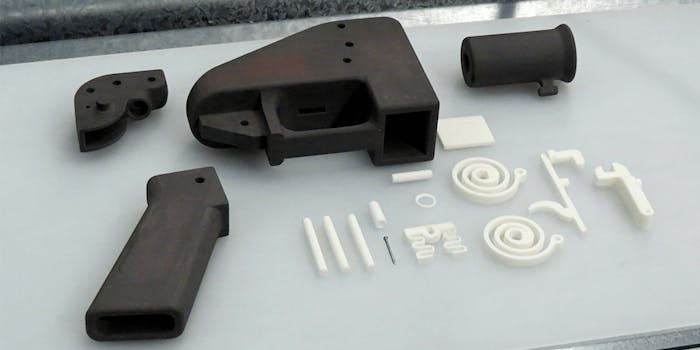 Even without the change, 3D-printed gun blueprints continue to spread unabated.

A proposed federal rule change by the Trump administration could see blueprints for 3D-printed guns back online.

The proposal is seeking to transfer authority from the State Department to the Commerce Department for certain small arms and ammunition exports. In doing so, according to the Texas Tribune, regulations that have barred 3D-printed gun blueprints from being posted online would be altered.

Gun control advocates warn that such a change could allow the blueprints, first published online in 2013 by self-described crypto-anarchist Cody Wilson, to fall into the hands of dangerous individuals.

Wilson was ordered by the State Department at the time to take the blueprints down from his website or face jail time.

The State Department, which argued that posting the blueprints violated weapon export laws, was hit with a lawsuit by Wilson in 2015. The firearm enthusiast defended his blueprints as a form of free speech and published them back online in 2018 after settling with the U.S. government.

Just days later, a federal judge blocked the agreement after numerous states pushed back on the settlement.

But the new ruling could make little difference, some argue, given that the blueprints were downloaded more than 100,000 times back in 2013. The firearm in question, a handgun known as The Liberator, has spread online since then and is still easily found through most search engines.

The Liberator is also incredibly dated. In the past seven years, 3D-printed firearms have advanced significantly, making The Liberator appear archaic in comparison. The largest concern, however, centers around the fact that 3D-printed guns use plastic, which makes them impervious to metal detectors.

Wilson, who was sentenced last September to seven years probation after being accused of sexually assaulting a 16-year-old girl, remains involved in the 3D-printed gun movement.