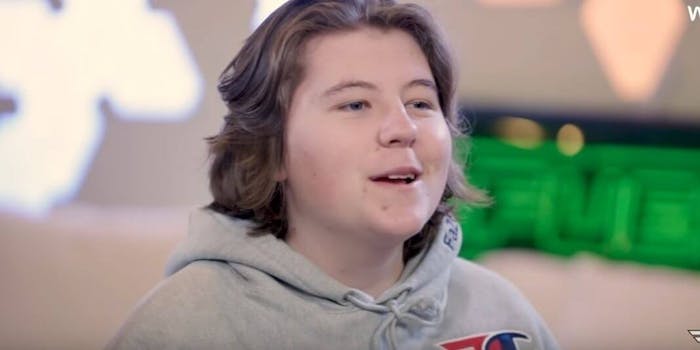 Ninja and Tfue have weighed in with their opinions.

FaZe Clan has suspended one of its top Fortnite players, FaZe Dubs, after the teenager yelled out a racial slur during a recent stream. Now, FaZe Dubs is begging for forgiveness online, and other members of the community have given their takes on the controversy.

But everybody seems embarrassed by the actions of Dubs, whose real name is Daniel Walsh.

It’s unclear if Walsh knew anybody was actually capturing the game live for an audience. Unfortunately for him, his slur went out to the world, and FaZe Clan took decisive action, suspending him for the time being.

“FaZe Clan will not tolerate any form of hate speech,” the organization said in a statement. “It is imperative for us to foster an inclusive environment in this community. Due to his actions, we are suspending Dubs indefinitely from representing FaZe Clan while in professional competition, streaming, or posting on his social channels.

For his part, Walsh also apologized, writing, “I can’t even describe how sorry I am. I did not intend to be hurtful in any way but what I said was still hurtful, insensitive, and wrong. The word shouldn’t have been in my vocabulary and I apologize from the bottom my heart to everyone I offended by using it. You deserve better.”

Not everybody was so forgiving, however.

Turner “Tfue” Tenney—who’s been embroiled in a lawsuit against FaZe Clan and who was banned by Twitch for 30 days in 2018 for using a racist slur—also expressed his opinion about the matter, saying Walsh probably wasn’t a racist despite the absolute racist thing he said.

“Just because someone says the n-word doesn’t mean they’re racist. I don’t fucking think Dubs is obviously racist,” he said. “But it is fucking weird that he would say it in his off time, you know? If you say it on stream, it’s an obvious slip-up. You can fucking tell, like when my dumbass said. But if he’s just saying it with his boys, it’s kinda fucking cringe. …

“He’s also like, 10. Not that that makes it better. But when we’re kids, we all do dumb shit. It was on accident? I don’t think you say the hard ‘r’ on accident.”

Said Ninja: “What makes it even worse is the reason he said it is because he thought no one was streaming. Yikes.”

Walsh has nearly 250,000 YouTube subscribers and another 225,000 followers on Twitch. But even with that kind of online influence, FaZe Clan didn’t have much of a choice with how to handle his racial slur. As Ninja said, FaZe Clan should part ways with him completely. So far, though, that hasn’t happened.