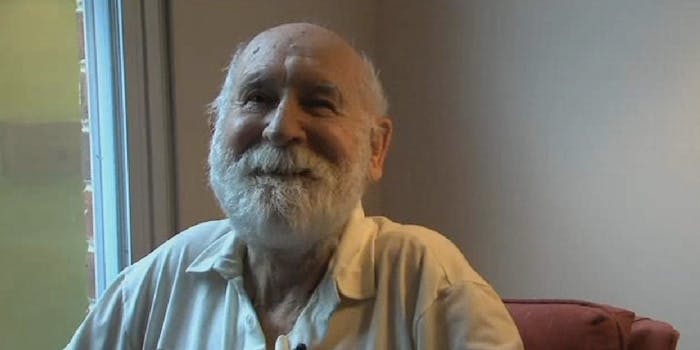 It's a well-timed message of love from beyond the grave. *sob*

Duane Schrock, Jr. was estranged from his father, who wasn’t comfortable with his son being gay. In a sweet gesture, Schrock sent a Father’s Day card in 1989 to try and reconnect, but the letter never arrived. Until now.

Duane Schrock, Sr. is now 87 years old and living in Lynchburg, Virginia. He recently received the letter from his son a full 26 years after it was postmarked. It was like getting a message from beyond the grave for the father, whose son passed away in 1995 from AIDS complications at the young age of 45.

Schrock, Sr. has moved around the country for decades and said the card must have kept getting forwarded until it finally found him.

The card, with an adorable illustration of a panda bear cuddling a baby panda, was inscribed with a simple peacemaking message: “Dear Dad, we haven’t been in touch for quite a while. I’m doing fine and am very happy in Richmond, I’d like to hear from you. Have a Happy Father’s Day, Love Duane.”

The father said that back then, he hadn’t agreed with his son’s “homosexual lifestyle” and “asked him if he’d made peace with God, because I want to see him in Heaven.”

Schrock, Sr. was overjoyed to get the letter, nearly 30 years after the fact. He thanked the post office, and said the fact that postal workers were so persistent, “restored [his] faith in the mail service.”

H/T and screengrab via WSET