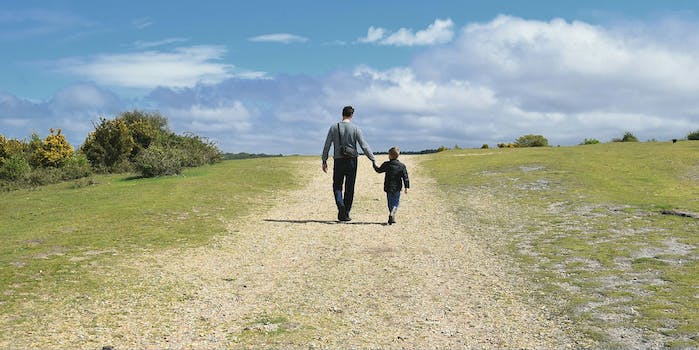 Pardon us while we wipe away the tears.

Father’s Day isn’t easy for many in the LGBT community. Whether it’s the pain of family rejection, or the unique legal and societal obstacles faced by many LGBT parents, the holiday can bring up some tough emotions.

This year, Father’s Day falls just one week after the worst mass shooting in U.S history, which led to the deaths of 49 LGBT club-goers and injured dozens more in Orlando, Florida. For some straight-but-not-narrow dads, the events in Orlando were a reminder of just how important it is to offer unconditional love and support to their LGBT kids.

On Twitter, father and writer S. Bear Bergman offered himself as a surrogate for people whose own fathers were less understanding.

If yr own father can't handle your queerness/gender/fabulousness, let me say that I'm a dad & I think you turned out great. #FathersDay

Angelica Ross, founder of TransTech Social Enterprises and actress on the web series HerStory, tweeted out a caring message her own dad sent just after the Orlando shooting.

Philadelphia-based artist and social worker Dyana Jean tweeted a photo of her “very gay” wedding, complete with a big kiss from dad.

Canadian Buddhist teacher Michael Stone, whose blog identifies him as a “straight white cisgender man” as well as a father, offered two kind sentiments to LGBT dads on Sunday.

One of the week’s most moving tributes to the survivors of the Orlando mass shooting came from the father of a man who was inside the gay club when the attacked occurred. Pulse survivor Christopher Hansen helped shooting victims get to safety during the attack, and then called his father late that night.

The message that retired Air Force veteran Bill Hansen posted on Facebook about his son was touching to say the least. Hansen said he was “so proud of my son. Both as a man, and as a gay man.”

The events in Orlando brought a lot of visitors to the area who were looking for ways to help, whether by donating blood or money or offering volunteer services of some kind. But for Illinois resident and father of five Greg Zanis, it was the families of the victims that he hoped to reach.

Zanis drove 1,200 miles from his midwestern home to deliver 49 hand-built white crosses to Orlando. He installed the white crosses, each covered with the name of a slain Pulse victim and a red heart, outside the Orlando Health Medical Center.

Known as “the cross guy,” the Christian dad told the Chicago Reader in 2004 that he had constructed over 7,000 crosses for murder victims since he began making them in 1996. Zanis was inspired to make his first cross after the murder of his father-in-law that year.

But the horrific events in Orlando weren’t the only reason dads from all backgrounds were reaching out to the LGBT community with messages of support this week. In a video created for Upworthy, several fathers spoke from the heart about what it means to be the dad of an LGBT adult.

In one segment, a father asks his son, “Were you scared to tell me you were gay?” The son responds that he had been “petrified,” and told his father that he had made plans for a place to stay in case his parents were going to kick him out of the house after he told them he was gay.

“I can’t believe you felt that way,” said the father with a warm smile. At the end of the video, the son wishes his dad a “Happy Father’s Day” and the two share a big, loving bear hug.